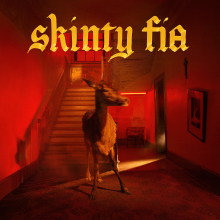 Unless you`ve lived in a cave or under a stone for the last five years Fontaines D.C. really don’t need any introduction. Their rise has been almost meteoric but justifiable. Their debut album `Dogrel` was Mercury Prize nominated and was a kind of poetic love letter to their hometown of Dublin. `A Hero`s Death` was much more reflective and self-analytical and about coping with whether they deserved their new found fame. `Skinty Fia` is the group`s third album and is written about Irish identity and comes from a band who have now all relocated to London from Ireland. The theme really resonated with me as my own Father arrived in Birmingham from the West of Ireland in 1957 and had initially set out for London. He never settled but met my mom, raised a family, and is buried here in his adopted home town. He never lost his sense of Irish identity, despite xenophobia and the horrors of the 1974 pub bombings in Birmingham. Indeed, he installed a similar love, pride and identity inside me and I follow Ireland in all sports to this day.

The album opens with `In ár gCroíthe go deo` which is written around a story about a women from Coventry called  Margaret Keane who died and when her family wanted to commemorate her Irish heritage by including the words “in ár gCroíthe go deo” on her gravestone. The words basically mean “in our hearts forever.” It’s just the heartfelt message, but the church of England itself ruled that it was … at risk of being perceived as a political slogan, so they refused to allow the Irish language to exist on an Irish person’s gravestone. The shocking part is that this is only two years ago. The song to me had an almost spiritual texture almost a eulogy for the departed Margaret. Grian`s vocal has an almost haunting quality and is stunningly reflective. A wonderfully moving introduction. A shook tambourine leads us into the Carlos O`Connell written `Big Shot` a track that wrestles with what comes of being in a successful band and defining what is real and what is superficial. It`s a larger than life slow burn that will really seep into your subconscious.

`How Cold Love Is` is another introspective offering and I read was influenced by addiction. Love being a double edged sword where support and encouragement is offered and at times abused. It`s delightfully mesmerising. The title of the next number `Jackie Down The Line` is a play on the word ‘Jackeen’, a derogatory term used against people from Dublin. It` a tale written from the point of view of a character who is almost unredeemable in an age where we are encouraged to be decent and upstanding. It`s delightfully dreamy with some resonating guitar chords shared throughout and lyrics shared in an almost matter of fact fashion.

`Bloomsday` is a contemplative reflection on the group`s hometown from afar. The streets, the buildings, walking in the steps of writers such as James Joyce. The title seems to have been purloined from a celebration of Joyce. As Bloomsday is celebrated on 16 June in Dublin and elsewhere, a day named after Leopold Bloom the central character in Joyce`s opus  Ulysses. The image is delivered in an almost laconic tone with some delightful resonating guitar chords giving it that feel that comes from a nostalgia for something that`s no longer part of your daily life. Another track written more about being new to a differing environment and remaining within a group of likeminded souls whose experiences and cultural background is / are similar to your own comes with `Roman Holiday`. It has a wonderful optimistic enthusiastic almost childlike vibe.

`The Couple Across The Way` has just vocals and an accordion accompaniment relaying the tale of a participant in a long term relationship ruminating on its many difficulties and considering if their young neighbours lives will undergo the same turbulent amour. The vocal delivery intertwined and almost mirrored the accordion`s vibrative tones throughout. The title track `Skinty Fia` follows which is an Irish phrase which translates to English as “the damnation of the deer” or to show disappointment or annoyance. The singer has said that “the song itself is just about a doomed, paranoid relationship with influences of alcohol, drugs, and paranoia. … I’m sure in some way, that’s how I feel being here, that there’s this doom ringing in my head and I don’t know why.” It`s a quite dystopian outlook shared quietly and in an almost resigned manner over a soundscape that fuses sounds akin to beatbox, clanging blacksmith hammers and moody ethereal guitar chords and a driving bassline.

`I Love You` is described by Fontaines frontman Grian Chatten as “the first overtly political song we’ve written”. A song about Ireland that needs a number of listens but will still leave you mulling over something new each time you return or just a kind of love song if you ignore the lyrical content and just dip in and out musically. A stunning earworm of a number that allows you to take whatever will satisfy your needs. The album closes with `Nabokov` whose title and words came from guitarist Conor Curley whom the band thought was consumed by the spirit and writing of Vladimir Vladimirovich Nabokov, also known by the pen name Vladimir Sirin, who was a Russian-American novelist, poet, translator, and entomologist. The lyrics are “about almost like a perverse take on … it’s compromise in a relationship sort of rendered as civility”. It`s a slight curve ball that takes you on a kind of surreal journey where the lyrics are shared in an almost arrogant vocal style over a kind of musical jam of sorts.

Ok, to me there are no what you`d call immediate bangers here such as `Big`, `Liberty Belle`, `Boys In The Better Land`. `I Don`t Belong`, `Televised Mind` or `A Hero`s Death` but there are songs such as `Jackie Down The Line` title track `Skinty Fia` and `I Love You` that will immediately enter your subconscious.

Grian, Carlos, Conor, Conor, and Tom have produced a thoughtful, meditative, considered, and mature snapshot on their lives at the present time and it`s a release that will need a few plays to really seep into your soul. It brought to the surface a variety of thoughts and emotions as I pondered the lives of my four uncles who came and lived with our family from Ireland in the mid-sixties before starting out on their own life journeys.

An album that will become a classic in years to come.