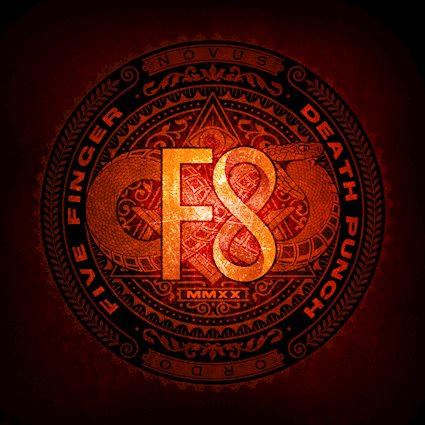 “I am taking back control….with my knuckles”.

It might sound like the Brexit slogan which that vile piece of shit Dominic Cummings rejected, but it isn’t. What it is, is the breakdown lyric on “Death Punch Therapy”, one of the bonus tracks at the end of “F8”.

The thing is, that the whole thing, every FFDP record sounds like it was therapy for someone. Ivan Moody – rather like Corey Taylor – has a knack of sounding threatening. That is to say, he’s the type of fella it seems to me, that could say “good morning” to you and make you shit yourself. Which consequently means that he sounds like he means every single word here.

FFDP, the band he joined in 2006, have quietly gone about their business since their first album came out 13 years ago, and have, as their record company is more than happy to point out, become the second biggest band in hard rock streaming (behind AC/DC).

Which brings us to “F8” – the follow up to “….And Justice For None”. And that “taking back control” thing? It permeates everywhere you look here.

Moody himself has been sober for two years, there’s a new drummer after founding member Jeremy Spencer dropped out.

The result is 13 songs and three bonus ones that seem intent on focusing in. Except this is not a “reset”. FFDP are, after all a massive deal and there’s a huge sound here too.

Everything here from the opener proper “Inside Out” has a groove big enough to fill arenas. The thing (produced by Kevin Churko – who has worked with everyone from Ozzy to Slash) sounds like a million dollars too.

They are fabulous at what they do. Why? Well, like “Full Circle” these are songs with social commentary, empowerment, and still with a fists in the air mentality. Guitarist Jason Hook – apt name if ever there was one – gets a sound that envelopes everything, and songs like “Living The Dream” soar.

“A Little Bit Off” deals with depression in the most matter of fact way possible (and that’s the ballad) and Zoltan Bathory anchors it with his rhythm guitar work.

It is interesting too, that that the band are heavier than you might think. “Is this heavy enough for you?” spits Moody on “Bottom Of The Top” and there’s a real modern thrash thing going on. “To Be Alone”  comes in with a modern crunch, but with an arena swagger also, and there’s a sense of impending doom, a nihilism if you will, on “Mother May I (Tic Toc)” that seems to inform all the record in honesty.

There are on or two moments that surprise. The darkly poetic “Darkness Settles In” is built around a folky like violin. It’s got million seller writ large all the way through it,  and the thought that new drummer Charlie Engen has settled in seamlessly is never better shown than on the machine gun kit work on the ferociously heavy “This Is War”.

“Leave It All Behind” is another of the left turns, its staccato delivery is perfect – and special mention too for the skill with which they write choruses. “Scar Tissue” is a lesson on how modern metal should be done, but seldom is, and the ballad that closes the record proper “Brighter Shade Of Grey” rather neatly sums up the band. “I am writing this in case I am gone tomorrow” sings Moody. And it jars, until you realise that this is Five Finger Death Punch. They are happy to bare their battle scars. And more power to them for that.

The singer has gone on record as saying that he: “really wanted to get back to [2013’s] ‘The Wrong Side of Heaven’ mentality where there were no barriers, and the sky was the limit. And that’s what our music is all about.”

There’s a definite feeling of that here. That’s not to say if you liked the last two that they’ve left you behind, more that they’ve focused and everything is a guided attack.

Pressing “F8” hasn’t meant an entry into Safe Mode here, that’s for sure.