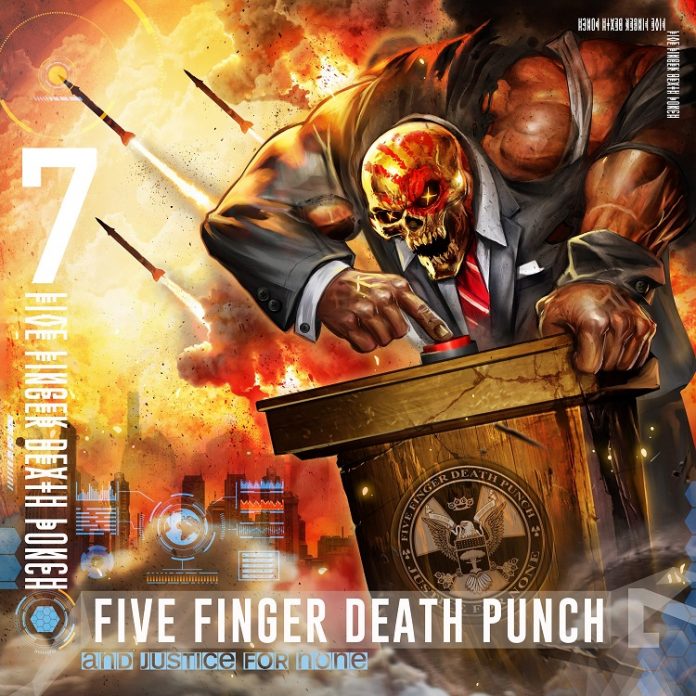 The other week I was at a Nickelback gig. A middle-aged woman in the front few rows was waving a banner around in Chad Kroeger’s direction. “Chad,” it said. “I’d look better with something in my mouth.”

Five Finger Death Punch had just toured with the “How You Remind Me” boys, and I don’t know if such things were commonplace in their set, but I’ll bet that FFDP wouldn’t care, because frankly, the only thing they want to put in your mouth here is a fist, or possibly a boot, either’s fine.

There is a cover of Kenny Wayne Shepherd’s “Blue On Black” towards the middle of the collection. KWS is a gifted blues guitarist and ostensibly the cover shouldn’t work. But it does. And that it does is in no small part to two things. First FFDP are a much better band than the rather more snooty media would have you believe, but second, they don’t water it down. Instead they flex their muscles still and tun it into some kind of southern rocker that wants to fight you.

“…None” is not, however, what you’d call a departure. Neither should it be, either. Five Finger Death Punch have a signature sound and they aren’t about to alter too much. The opener “Fake” is a potty mouthed chugger that is designed to exorcise some demons: “I’m not your scapegoat, ram it down your damn throat, for me it’s just another day.” Spits Ivan Moody here, and the feeling that it is business as usual is all over this.

Most of the 13 songs here simply slam. “Top Of The World” is a little like Slipknot – certainly there aren’t many apart from Corey Taylor that can make talking sound so threatening – “Sham Pain” is a knockout, as it takes on the critics and deals with the problems of a life on the road, while “Fire In The Hole” has a fists in the air flavour of power metal about it. Unashamed too. “Regret it? Never” sounds like not only a key line for the track but the whole record.

“I Refuse” is a power ballad in the great tradition, complete with a fine acoustic solo, but is balanced out with the middle finger raised thrasher that is “It Doesn’t Matter”, but the thing is whatever turn this takes, it is generally the right one.

Even in the mid paced “When The Seasons Change” – a sure fire hit if ever there was one – there is a hint of menace, and even if nothing here outstays its welcome then “Stuck In My Ways” is one of many that doesn’t half sound epic.

Some of them sound similar to each other, “Rock Bottom” for example, but its not like FFDP don’t know, or even that they care. “If you don’t like it, you can go ahead and die” suggests Moody helpfully here, and anyway, the last few songs possess much less bluster. Their version of Offspring’s “Gone Away” is no doubt heartfelt, “Bloody” is a nice slice of Godsmack type introspection, and the closing “Will The Sun Ever Rise” manages to sound even plaintive.

Last year’s best of could have been considered a watershed for FFDP. The end of one chapter, the beginning of another, perhaps. The thing is, you wouldn’t want them any other way. You want them as brash as the Las Vegas home, as uncompromising as hell, and you want Ivan Moody at his cathartic best. “…And Just For None” delivers all that – and in fairness to them – a fair bit more.