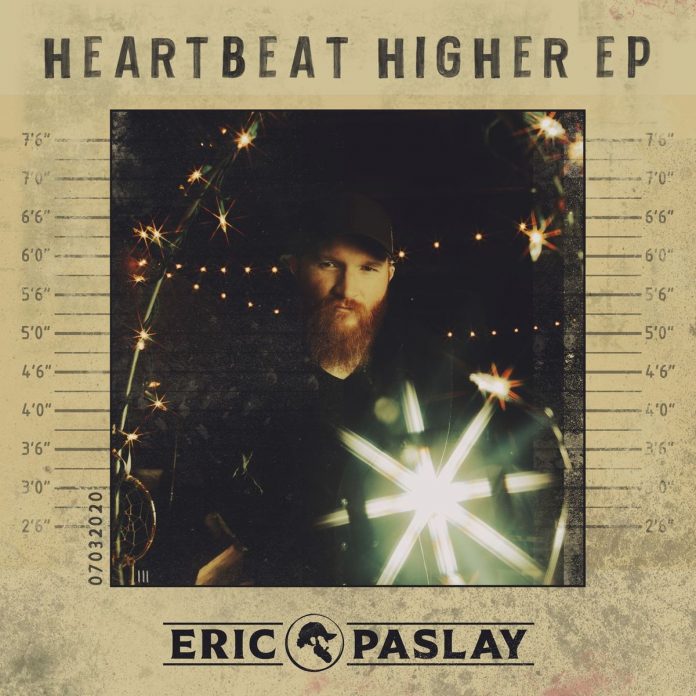 It’s odd you know. You look at the career of Eric Paslay, and you see that he’s released one album.

But you know that cliché about “but that’s only part of the story?” Well, here that is apt.

See, he’s had five number one singles, four of which have been ranked in the 100 songs of the decade. And they’ve sold millions in his native US of A.

Oh and he’s been nominated for Grammy’s for his work as a writer with other artists, notably Charles Kelley and Dierks Bentley.

All of which means, really and truly that it doesn’t really matter what “Heartbeat higher” is like, because it will sell by the bucketload, and it will provide the soundtrack for summer nights in the Midwest.

But, and here’s the but. So universal are the songs on “….Higher” that they may well resonate everywhere else around the world too.

Of the four songs that make up his first new collection for a few years, the title track (Premiered on Radio 2 over here) is a decent clue to what you are getting. Pop music (but remember that just means “popular”) for grown-ups, the expansive strings, the slightly epic feel, the almost duet at times with Sarah Buxton, this is the one for the drive-thru romance in the post-Covid world.

Clearly a gifted songwriter, there is something timeless about “This Side Of Heaven” and whilst the sentiment, the grief, is heart-wrenching, it stays clear of the syrupy stuff. Instead it builds superbly with a stoicism a grit, that many wouldn’t do.

The record’s cover is proof that Paslay does things his own way. Taking on Mike Posner’s “I Took A Pill In Ibiza” is one thing, to make it his own, is skill. He finds a melancholy in the lines “I’m just a singer who already blew his shot. I get along with old timers ‘Cause my name’s a reminder of a pop song people forgot.” And it ends up being a highlight.

The last one “Boat In A Bottle” is written with Buxton and Producer Tofer Brown, and it has an 80s pop feel, but the chorus sticks with you in a way you perhaps didn’t imagine it would, and you can imagine if we are ever allowed at gigs again, then this one might be an uplifting experience.

Although Eric Paslay is seen by many as a huge deal in modern country, it is odd, maybe that this isn’t actually that much of a country record at all. It is, in so much as he has it ingrained, but “Heartbeat Higher” has a lot more going on than being worried by constraints of the past. And maybe the full story is yet to be revealed.

Previous article
BAND OF THE DAY: FLIGHT ATTENDANT
Next article
ZAKK BACK TO BLACK