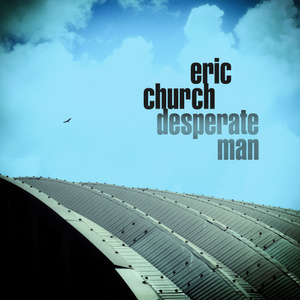 It’s easy to give platitudes. It’s harder to mean it.

Back in 2014, Eric Church – a man who lest we forget has sold millions of records, been nominated for Grammy’s all over the place, and  won CMA’s album of the year a couple of times – wrote a song called “That’s Damn Rock N Roll”, wherein he attacked the fakers: “It ain’t a middle finger on a t-shirt, the establishments tryin’ to sell, It’s a guy with the balls who told the establishment to go to hell. It ain’t about the money you make, when a record gets sold, It’s about doin’ it for nothin’, ’cause it lives in your soul” he sang.

Many have said similar things, but the boy Church, the following year, released a record called “Mr. Misunderstood,” which he stuck out without any fanfare, and it was given as a gift to the fans first.

Which is precisely why, when dealing with Eric Church, when you chuck in words like “authentic” and “real”, they mean something.

For “Desperate Man” it seems like he wanted to continue the progression that was evident on that 2014 record, “The Outsiders”. Church, you see, as well as being a damn fine songwriter, has always appeared to be an artist that wanted to challenge himself.

The opener here, “The Snake” is from that type of place. It couldn’t really, have been on his opening few, resolutely country, albums (and don’t get me wrong they are top notch). Its darkly brooding, sparse bluesy stylings give a stark introduction. The half-spoken delivery brings to mind the work of latter day Steve Earle, and the soulful backing vocals only add to the class on show.

“Hanging Around” is another where it seems Church has deliberately placed himself – musically – a long way from home, Funky, almost Motown, and a falsetto delivery aren’t what you’d normally associate with him, but it works superbly.

“Heart Like A Wheel” is a little more what you’re used to. Except it’s not. It’s more Jarrod Dickenson’s old-time vibe than a Hank Williams thing, but all those who want something “proper” country, as it were, will be sated by the wonderfully catchy “Some Of It” where Church speaks from the heartland and does so as only he can.

“Monsters” is another that preaches to the Choir, and this type of blue-collar, family orientated thing speaks to everyone. Even those, like me, who have no faith at all – in anything – can find something in its lyrics – and the guitar solo here is strident.

And actually, it is followed up by the best thing here. “Hippie Radio” is a perfect example of the small town tales that Church manages to infuse with a real universal quality. If this was a Springsteen song, frankly they’d write essays about what it represented. The rest of us, in our early 40s who remember driving their first car listening to Billy Idol too, even if we did it thousands of miles away, can relate.

“Higher Wire” with its strange instrumentation, is perhaps the best example of the two worlds here colliding. The classic and the new rub shoulders, while the title track, well, lets assume that everyone knows its sounds like a rebooted “Sympathy For The Devil” shall we? Mind you, it’s not exactly a bad song to borrow from is it?

“Solid” is aptly named, doing the job it was meant to, and “Jukebox And A Bar” is the archetypal cowboy at the end of the bar drinking his troubles away, and whilst a feature of many of these songs are sparse accompaniment, then “Drowning Man” absolutely benefits from the approach.

At the end of it all then “Desperate Man” is going to sell by the bucketload and be number one on the billboard charts by simple virtue of it being the new Eric Church record. The fact is, though, it deserves to,  just as he deserves to be recognised as one of the finest singer/songwriters there is.