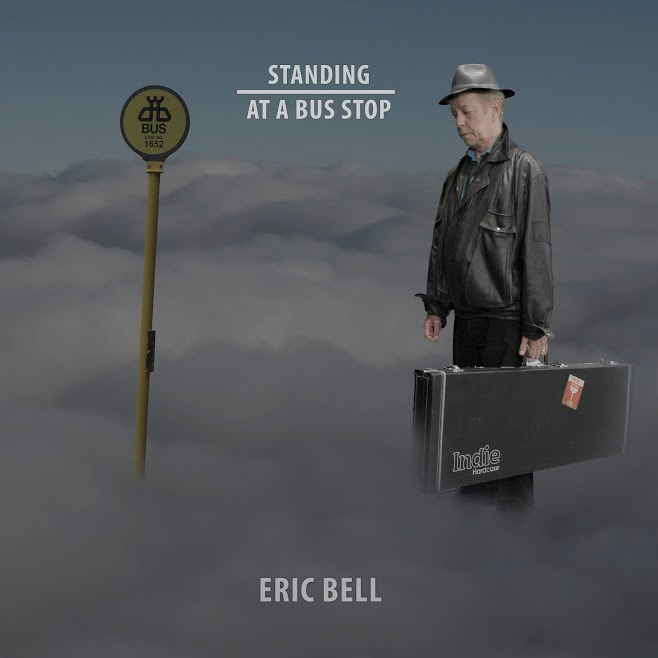 …But standing anything but still

In early 2016, Eric Bell released his first album in seven years. “Exile” was a wonderfully personal work, on which he exercised his demons and stretched himself.

That approach seems to have set something off inside the Northern Irishman, because, he’s back. No lengthy hiatus this time, just another collection that is arguably even more diverse – and perhaps even more personal – than “Exile” was.

Things begin here with one of the two covers that “….Stop” has. “Back Door Man” has been done by everyone, of course, but it is doubtful that it has ever sounded as earthy and primal as it is here.But if you thought that you could peg the record as a blues affair, then Eric Bell isn’t interested in your expectations. He is, however, keen on confounding them.

As if to prove the fact “Changing Room” is light and funky, but it takes the artist back to a time where he had to take a job in a Camden Market to fund his then girlfriend’s expensive tastes; “We said we’d take each other, sickness, health, rich or poor/Well I feel alright in my mind and body, in my pocket I am not so sure….”are two lines that still seem to hurt after all these years. It is interesting too, that he sings this in his natural accent where many would hide behind the usual fake US one. It makes the song seem even more real.

“Frustration” is another that is more soulful than you’d imagine. A take on Motown, if you will, the music hides a dark subject and it switches gear effortlessly. In many respects, perhaps the most surprising song here is “Golden Days”. As pure a rock n roll song as you can imagine, it is the spirit of Chuck Berry distilled and it is absolutely glad to be alive.

It neatly segues into the album’s other cover. “Mystery Train” is a pretty faithful rendition of the Elvis classic and evokes memories for MV of listening to the original at grandparents decades ago. Perhaps it does something similar for Bell, but whatever there is no doubt he sounds absolutely content and at peace here.

On the rest of the record he is searching, maybe for that serenity. He damn sure isn’t finding it on “One Day Too Early”. A true story about returning home from tour with Thin Lizzy to find his girlfriend in bed with the bloke in the flat upstairs. Done over a classic acoustic blues strum, the woman done me wrong theme is perfect here.

This, though, is a record where nothing was off limits. “Pavements Paved With Gold” has a real Celtic flavour, but it’s unquestionable highlight is the folky “Reality.” As raw as you could possibly imagine, Bell – who was “floating around” – deals with a break-up. “They patched up your wrists and we called it a day” he intones. It is a difficult song to listen to, as it was no doubt to write, but it is stunningly done.

The title track, again deals with personal matters. And it is the small details that hit home. “I was brought down to Dublin in the back of a Jaguar car” offers Bell, before talking of the “Ghost in the showband suit,” and there is real emotion in the playing. As there is about the dreamy closer, “Walking Through The Park,” a trippy thing that appears to induce a dreamlike state.

The other song on the album – an instrumental tribute to his hero Django Reinhardt – actually says more about Bell the musician, perhaps than anything else. So talented is he that he could have done what he wanted with this record. It just so happens that what he wanted to be here was a singer/songwriter. And the results are superb.