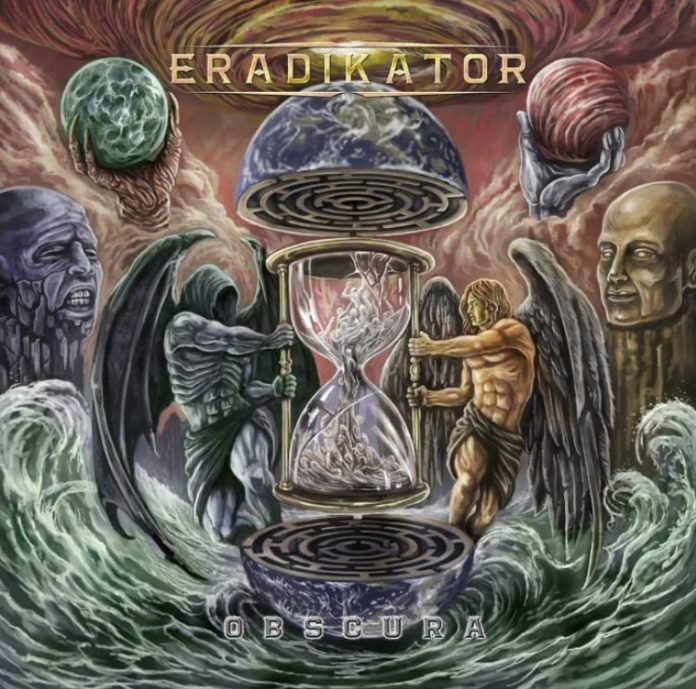 Take Eradikator. They are thrash. For as long as I can remember they’ve been playing gigs where I live, and I’ve seen them umpteen times over the last decade or so. They won M2TM one year, slayed it at Bloodstock, too. The next year when I judged M2TM they were the band who everyone looked up to and wanted to emulate.

Then they released their third record, “Edge Of Humanity” in 2015, and that was a stunning piece of thrash too. Brilliant. I was moved to call them “the best thrash band in Britain” at one point.

All down to that special K, you see.

Thing is, though, that time, rather like the hourglass on the front cover, moves on. What you were in 2015 doesn’t need to define you in 2019, after all.

Which is a roundabout way of saying that whatever you thought you knew about Eradikator you can pretty much forget. Because whatever they were, they aren’t now. Unless you are looking for the glib statement “well, they’re still brilliant,” because they are. “Obscura” is. It’s just not what you’d expect.

“Nightmare Dawning” is a signpost to that. There’s no preamble. It just starts. And smothers you with its Mastodon-like groove, and if there’s a kind of incessant metal thing about it, it is still way more sedate and nuanced than it used to be.

I hesitate, here, to use the word “mature” because that pre-supposes that thrash is somehow immature (and I don’t want to be the one to tell Kerry King that, thanks) but stuff like the wonderful “Poisoned To Sorrow” proves that here, under the guidance of Russ Russell, that wings have been spread, boundaries pushed and everything else rethought.

They haven’t gone grime on us, don’t worry. But neither, in honesty, would something like the brilliantly, darkly brooding “Revolve” have been on the first few albums either. More in common with AIC than Anthrax, Pat Cox has really stretched himself vocally.

The middle part of this record is really special, because as good as “Haunting” is, then “Hourglass” runs it close, it really does. A twisting, turning, heavy and ambitious piece (and, all those epithets could be added to the whole record) it drives the thing forward.

Andy MacNevin and Liam Priest’s guitars are on top form throughout, but the balladic “Eyes Of Old” switches gear by throttling back, while Jon MacNevin’s drums add some mighty percussion to the heavier “Bound To You”.

A nine songs that is never short, anyway, feels especially undulating on the seven-minute journey through peaks and troughs (and I am sure through some slide guitar?) that is “I Want To Believe”. It could only have been made by a band that did.

Likewise, “The Siren Song” adds an element of prog to things. There is just a taste of early Genesis, before it opens out and screeches off. It is a fabulous – but also totally in keeping – conclusion.

In keeping because it is open to different textures. That is what “Obscura” does. It plays with the whole kaleidoscope of colours, and then does it in widescreen.

Change is hard, it is scary, and when it’s attempted it should be applauded. When it is pulled off this well, it should be hailed too.