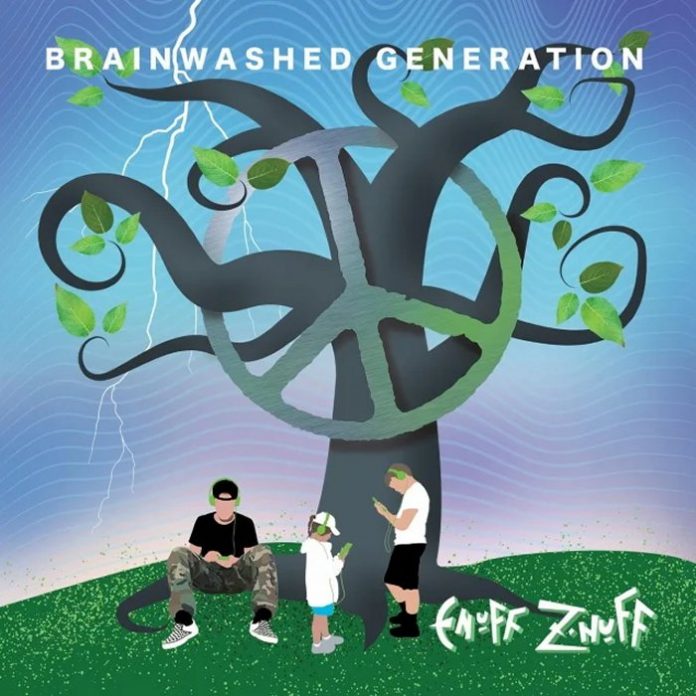 On their review of this record, Loudersound get straight to the cliché. Power Pop Hair Band, Enuff Z Nuff, it says, and in the very first line to boot.

Chip Z’Nuff (the sole original member) probably doesn’t give two shits about such things, but it upsets me a fan of long standing.

They have about as much to do with Hair Metal as they do with Slayer, quite frankly. Indeed, as I wrote in my review of 2018’s fabulous “Diamond Boy” album, it was after looking for other bands that could fill my Electric Boys shaped addiction in 1990 or so that I found the crazy world of this type of peace, love, psychedelics and power pop.

But there’s another reason for mentioning that “…Boy” album. It simply – almost universally it seemed – reminded everyone that EZN were a fabulous band. And the good news is that “Brainwashed Generation” essentially carries on where that left off.

I am going to say right from the off that I don’t think anyone in the current era writes songs like this as effortlessly as Chip. Catchy, but naturally so – a little like The Wildhearts – it doesn’t matter what they sing about (and “Fatal Distraction” with its line “if there’s a hell, I hope she goes there” is bleaker than you imagine) still sounds sweeter than a bag of Skittles and happier than a toddler in a paddling pool. It’s a gift.

There are some fabulous songs here. Not least “Put Your Money Where Your Mouth Is”. The chug of the guitars from Alex Kane (who gets Antiproduct and Clam Abuse bonus points around here) and  Tory Stoffregen – who form quite the team. But the harmonies too. They swirl, they take you away from all this. That’s what they’ve always done.

The Beatles – meets Cheap Trick flavours that have always bookended their work, are even more stark than normal on album 15. “Help I’m In Hell” dealing with the aging process in trademark fashion.

There’s a raft of special guests too. Mike Portnoy is the headline, perhaps and he appears on “It’s All In Vain” playing a replica Ringo Starr kit, and its got a real 60s feel. Lush and gorgeous.

Long time fans will be salivating at “Strangers In My Head” though, as they get the old band back together. Literally. As Donnie Vie is reunited with Chip, and the old magic is present and correct. Daxx Nielson (son of Rick and drummer in Cheap Trick) is here too and there’s mention of Ace Frehley on “Drugland Weekend”. “The sweet heavy metal” sings Z’Nuff here and you know what? He’s nailed how I’ve always thought of the sound.

“Broken Love” is the records only true ballad, but goodness me, its from the heart. A gorgeous tribute to Chip’s brother, “pain, I’ve got so much pain” he offers here. “hope, there’s no ray of hope….feel like taking dope” and yet, still it offers a light at the end of the tunnel that somehow this music always did.

“Go….” Comes in with a bigger, brasher sound. A real depth – and it is striking there are no let-ups here. While the last one “Winding Road” has, for Enuff Z’Nuff anyway, a real groove. One you could nod your head to, rather than float along with.

So, for long time fans, you’ll love this. The rest of you, the “Brainwashed Generation”, so to speak. Ignore the hair metal cliché and instead you’ll find one of the most interesting bands around. One thing I will add though, is of all the late 80s rock bands still going. Enuff Z Nuff stand alone in the quality of their modern material, and how true they remain to their ethos.