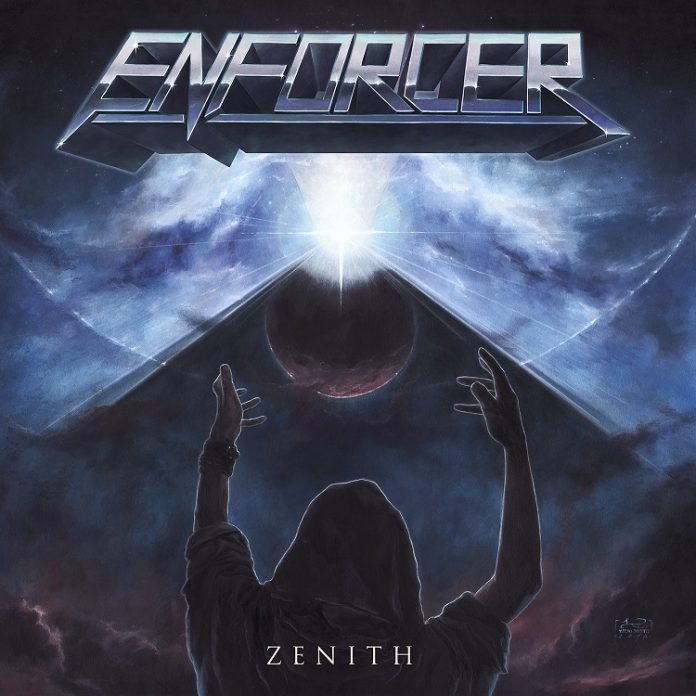 Whatever else you can accuse Enforcer of, a lack of confidence isn’t on the list. This was the aim of “Zenith”, in the words of singer/guitarist Olof Wikstrand:

“The first thing we agreed on, even before we had any songs, was to just not do another ‘album’ but to do the biggest heavy metal album of all time without any type of limitations”.

But then, there is nothing wrong with ambition, is there? No one can ever criticise someone for thinking big.

And make no mistake about it here, “Zenith” isn’t big. Its gargantuan.

What it also is, across its 10 tracks of absolute gloriousness is every heavy metal cliché in the book, this is the type of record that those who don’t like heavy metal think all heavy metal sounds like. That is not meant in any bad way, because you’d best believe that Enforcer understand all this and moreover, they revel in it.

They wear their metal credentials as loud, proud and out there as anyone else, and that is clear from the outset. “Die For The Devil” couldn’t be more denim and leather if it tried. It is 3 minutes 11 seconds of fists in the air fury. Look, this isn’t Deicide. Olof sings “through the darkness of Lucifer, I light my way” and makes it sound like a nursery rhyme.

This is purely and simply, pure and simple metal fun. That’s all it is. The title track is beautifully done, its intro comes straight off any modern Maiden record too, and the absolutely thunderous “Something For You” is, well, absolutely thunderous. The double kick drumming here from Jonas Wikstrand (who also plays keyboards) is magnificent.

His piano on the incredible “Regrets” is worth buying the record for on its own. “Lordi won Eurovision” it seems to say, we’d like to, as well.”

What Enforcer do, perhaps better than any other band of their type, is make the epic sound remarkably catchy. “The End Of The Universe” goes full-on Saxon and even though its about the apocalypse, you sort of know it’ll be alright in the end.

“Sail On” is a glimpse into what they might have been if they had chosen a different (left hand?) path. A cross between Deep Purple and early Whitesnake, it is drenched in the 1970s, but has more life than most of those retro herberts.

However, you did kind of want this to have a good old parp, something like Hammerfall, to that end, “One Thousand Years Of Darkness” soars like a…..dragon I suppose? “Thunder And Hell” ushers itself in with a ominous intent, but it is soon screeching like the rest, and if they need something for the closing credits of the last Game Of Thrones, then I’ll humbly put forward “Forever We Worship The Dark” – which if nothing else would make the damn series bearable.

“Ode To Death” dispenses with any remaining pretext that this isn’t overblown and wonderfully – and wilfully – pompous. A seven minute journey through goodness knows what, it ties up all the remaining loose ends and wraps them up in a bow.

So, “the biggest metal album of all time?” no. But goodness me, “Zenith” is a brilliant and mighty one. But Enforcer already know that. It’s as clear as the darkness throughout that this is their pinnacle.