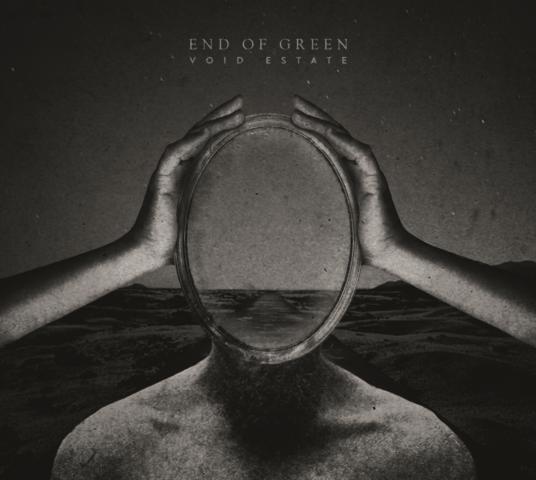 Don’t forget to close the door

Calling your style “alternative darkness” really doesn’t leave much to the imagination. End Of Green have– for the last 21 years – occupied their own particular hinterland of doing whatever they choose.

“Void Estate” gets cracking with one of their trademark hybrid things that rather defies classification. “Send In The Clowns” is perhaps the least apt song title you could possibly imagine. Dark doomy balladry, it is mercifully free of the growling vocals that so destroy other bands of their ilk.

That is not to say, however that singer Michelle Darkness doesn’t possess a full range, indeed for most of “….Estate” he appears to be trying to outdo Nick Holmes of Paradise Lost. Former touring partners with Yorkshire’s most grim men, they also have sonic similarities. Never more than “Darkside Of The Sun” which has the same epic intent and is a real – bleak – highlight.

There is much to commend this elsewhere, though. Not least the fact that EoG recognise the need for hooks. “The Door” is genuinely catchy and “Crossroads” is close to being upbeat. Close, but don’t worry there is no cowbell here.

What there is, is a rich sonic palette on a record that refuses to get bogged down the morass that most of their contemporary’s do. “The Unseen” has a real 80s feel, almost reminiscent of U2 (when they were good, obviously) in places. That one segues into “Dressed In Black Again” – and really you can’t imagine them wearing anything else.

Whilst you couldn’t dream of claiming that this was a “heavy” record – musically at least – there is a metal edge to “Mollodrome” and the unsettling lyrics, “Can’t believe he’s dead. Without warning”  takes the cut to some really dark places.

“Worn And Torn” seems to sum up their mental state throughout not just this record but their career, but it is done with a subtlety and – yes a light touch that suckers you into their world and the superb guitar work is prevalent throughout.

What they also do better than just about any band of this type is keep the epics to a minimum. Not every song, after all, has to be 10 minutes to make its point. One of the longer ones, the closing “Like A Stranger” is clear in its intentions :”you can love me, “ ponders Darkness, “I will hate you.”

This won’t be for everyone, but those who never even liked children’s parties when they were children will find much to enjoy. If you feel there is no light at the end of the tunnel and the grass ain’t ever greener on the other side, then End Of Green are with ya brother. They will welcome you in with a cold shoulder, just the way it should be.