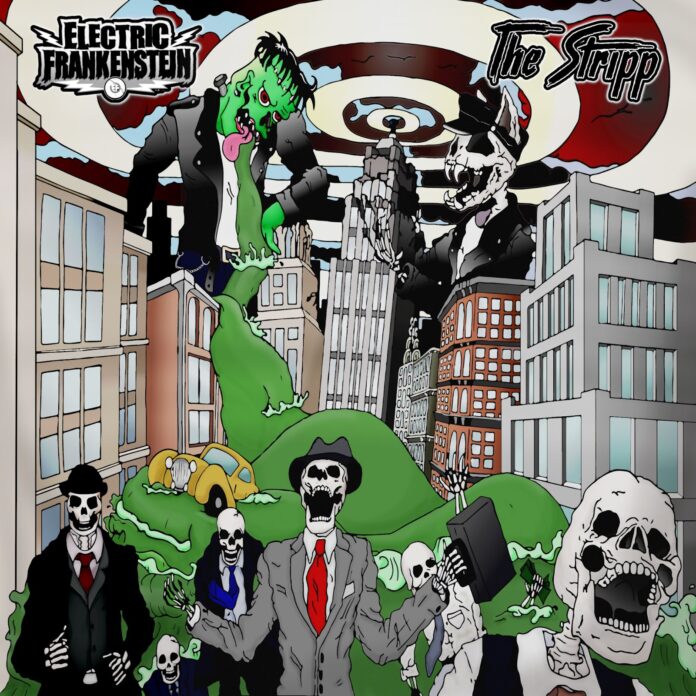 Granted it is the rather odd standpoint of a music website that the world was a better place before the internet (I won’t accept any argument on this), but in those Halcyon Days when we could still communicate like grown ups and there were actual shops where you could by stuff, I used to get lots and lots of records sent by Mail Order. I was in a kind of tape trading thing and for all the acts that I love and mention about 15 times a week in reviews (Dregen was in most of them) there was this band that were basically the kings of what for some reason we now call “Action Rock” (I like to assume its after the Hellacopters debut, but honestly I haven’t a clue). Electric Frankenstein.

Long story short, they’d just released “How To Make A Monster” (arguably along with Backyard Babies “Total 13 and that aforementioned Hellacopters one, the seminal moments)  and I resolved to collect all they’d done. Take a look at Wiki and “discography” and you’ll see why I gave up, but in many ways this split thing is very much their ballpark.

Lets be honest, there’s more than a hint of The Wildhearts in the intro to “American Lies”, and once it gets going it is right up there. Guitars screech, lead breaks come and go as they please and Steve Miller spits the political lyrics – “…And Justice For No-one” is a powerful line to finish.

Their other offering “Everybody’s Dead Again” had me thinking that it was going to be “Good Times, Bad Times” to start with, but no. This is the sort of tuneful nihilism,, the same thunderous glue-sniffing, crunchy punk rock that you can’t fail to love. A fantastic song, from a fantastic band. If you don’t know them, you really should.

The other pair of tracks on this mighty thing are from Down Under. And if EF are royalty, then The Stripp are – to be totally truthful – a new name to me, but they are equally stunning.

“Dice Man” casts front lady Bek Taylor as something special. Capable, it seems to me, of winning a bar fight with early Guns N Roses (the yelp of “yowser” at the end is pure Axl and everyone knows it) but equally ready to hang with Hells Angels, Zeke fans need to apply here.

Last one, “The Rising Tide” is basically proof that if you are doing rock n roll that doesn’t sound like Motorhead, then you’re doing it wrong. The drums destroy alone, never mind anything else and when it comes to The Stripp, you can very much consider me in the club (sorry, but I had to).

Fantastic, and there are probably better ways to spend 11 minutes, but I dunno what they are. EP’s always make me nostalgic, a split one even more. This one will make you want to stop buying things on Amazon and go back to tape trading.