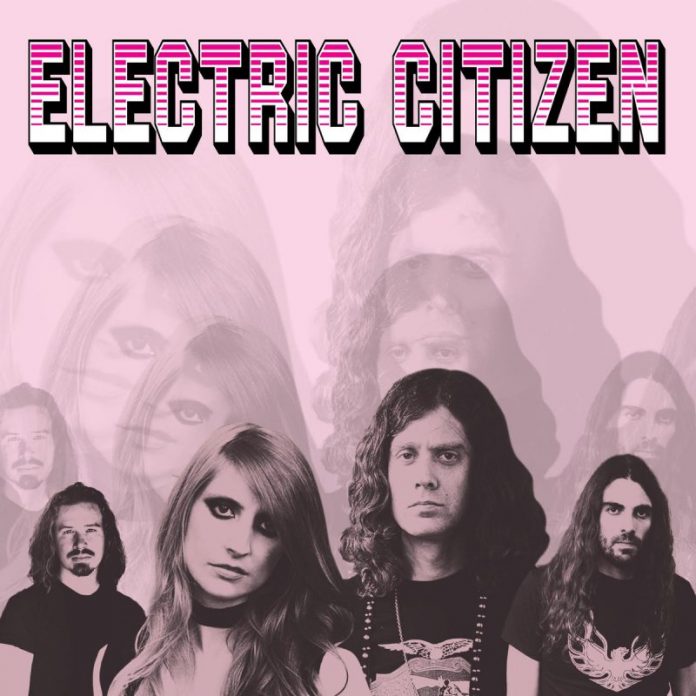 Self-proclaimed “rock n roll for the fringes”, Electric Citizen have recently been seen on the stages of Great Britain as support to Wolfmother.

Those shows introduced a band that dealt with big ol’ stoner grooves, together with as many psychedelic flourishes as you could wish for which – when mixed with hypnotic, brooding stage presence of singer Laura Dolan – made for an intoxicating brew.

Rather than being one of those bands that either a) sounds better live or b) can’t replicate their wonderful studio prowess in the live arena MVM is very happy to report that this, their second album, is exactly as good as you hoped it would be based on the 40 minutes with Andrew Stockdale and the boys

Following on from the debut, “Sateen” from a couple of years back, “Higher Time” is an accomplished and classy effort.

When they truly get it right, as on the title track which sees Dolan almost cast a spell in the trippy middle section before her husband Ross soars away with his guitar, they are a pretty formidable outfit.

Likewise, “Ghost Of Me”, which follows, might have a harder edge, almost Maiden-esque riff, but they can’t quite resist bending the formula with some well-chosen organ parts and dreamy sequences.

Indeed, there is a barely suppressed feeling of some dark forces at work throughout, as if something altogether demonic lurks just under the surface to appear at moment. That is evident right from the opening bars of “Evil”, the record’s Sabbath-like opening track, and it’s all over “Misery Keeper”. When Laura Dolan offers up, “I never meant to cause you pain, I only wanted the misery,” it really does feel like she means it.

Whilst the sonics of the record don’t alter much throughout, the songs do have their own distinct identity. “Devils In The Passing Time” has a mighty groove about it, “Golden Mean” swings and “Natural Law” happily looks for something monstrous in the dark.

The guitar tone here is king, “Crux” is fuzzy, and the immensely catchy “Two Hearted Woman”, at under three minutes doesn’t need long to make it’s wonderful point. In doing so, it gives the album a fine, swirling conclusion, with its lead guitar elevating things still further.

Electric Citizen are one of those bands that have achieved the not inconsiderable feat of creating something timelessly classic but which simultaneously never sounds dated. On “Higher Time” they’ve  aimed big and pulled it off.