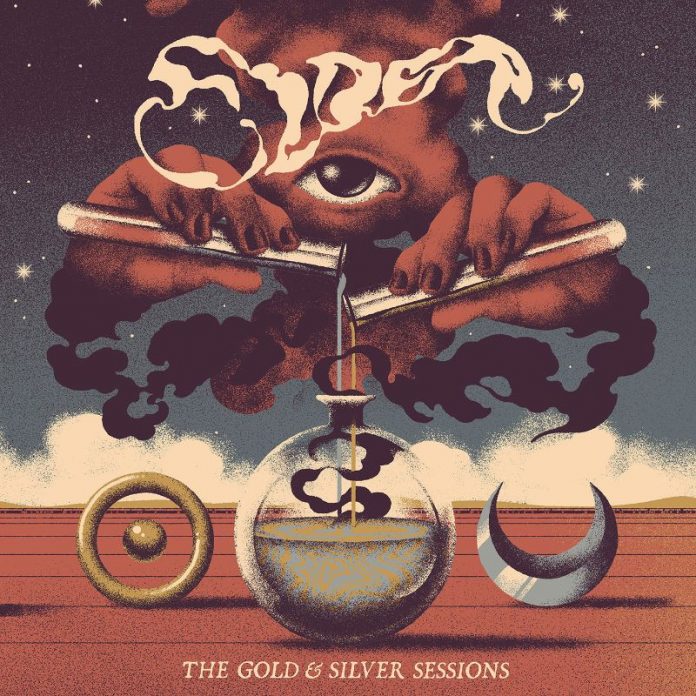 Elder are one of the reasons that I don’t do end of year lists on the site anymore.

For one thing, I think such things egotistical and slightly tedious, but for another, rather more practical reason, I refuse to engage.

You feel obligated to do them, and the attendant “songs of the year” that goes alongside, but sometimes, music defies classification in any normal way. Some things deserve more than mere rankings.

A few years ago the Boston band (now a four piece with the addition of keyboardist Mike Risburg as a full time member) released an album called “Lore” which was somewhere beyond astonishing and towards seminal.

Prog rock, labyrinthian, and very, very long it was one of the finest records of that year, but yet ranking it in a list alongside more visceral things, seemed entirely wrong.

There was another album after that – and now there’s this. And this is where it gets really interesting. As the band put it themselves: They went into a Berlin studio to make “something liberated, unrestricted and experimental with no pressure or expectations.”

And goodness me, left to their own devices, it is quite – and I mean this in all senses – a trip.

“The Gold and Silver Sessions” is part of the PostWax project from Blues Funeral Recordings, an ambitious series of releases with interconnected art and an ethic encouraging its artists to try things they might not within their normal album cycles, and in the case of Elder they’ve not disappointed.

Taking its name from frontman Nick DiSalvo’s jammy, exploratory side project Gold & Silver, which he’s in with Risburg, this is three instrumental songs, clocking in at way over half an hour.

“Illusory Motion” is beguiling and hypnotic, the guitar work of DiSalvo is brilliantly varied, and the keyboards really add something to the mix. Post rock, there’s some taut fragility here too, and it is a world away from the Elder maybe know – and will love if you do.

That is the point, though. And credit to them, they’ve really gone for it. “Im Morgengrauen” floats in a dream-like state, and if they’ve hinted at prog before, then, they are right here now. There’s a real Floyd type feel to the lush opening section.

As much as it feels like this is one piece of music on occasion, then there are subtleties  about each. The last one, “Weißensee” sees the drums of Matt Couto right to the fore, as it meanders and wanders. 18 minutes plus, it sucks you in and like all the best instrumental music it allows you your own thoughts as to what it means.

That’s before it builds to a real crescendo. A real heavy, thunderous squall, as if designed a) to jolt you and b) because they could.

And those three words: because they could, in many ways sum this up. A band pleasing themselves, obviously, by definition, but also creating something special for everyone.

Dive in, you might find something you love. It’ll certainly challenge. But it is supposed to. And like their best work – it defies classification.

Previous article
BAND OF THE DAY: FLOORBOARDS
Next article
TIME FOR EXHORDER