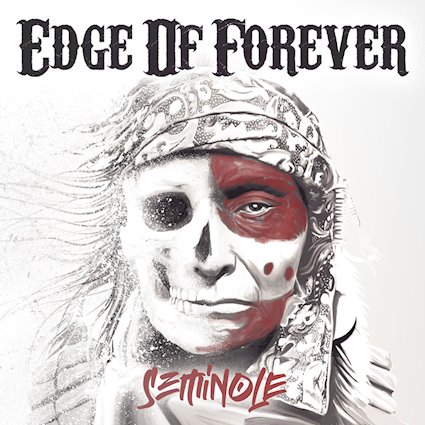 Alessandro Del Vecchio. The name gets written on this site more than almost any other. At first glance it might seem like the moniker of a right back in a Premier League club’s u-23 team. The sort they fetch from a Serie B club to take a chance on for the future, but no. Not this one.

This one is responsible for more AOR than you have ever thought of. If you like a melodic rock record, then the chances are, ADV has written it/produced it/played keyboards on it. And probably all three.

Edge Of Forever is his band, too. In honesty, it is the one he seems to like most. “Edge Of Forever is different for me. It’s my island where I don’t wanna just write songs that I sing. I want to tell stories that can inspire people to reach their goals, live for their dreams, face adversities, and win over all the odds that life throws at us” he reckons.

There is a bit of that in “Seminole” (and the Seminole are a Native American people who developed in Florida in the 18th century), so if self help is your thing, then there’s a definite positivity about these songs. If like me you get through the bad times by emailing your ex in the hope that she’s definitely going to respond this time (spoiler alert, to be fair she occasionally does) and just love melodic hard rock, then Edge Of Forever are still your boys.

“Get Up On Your Feet Again” will actually decide what you think of this. It’s melodic rock of a particular type, the sort that Dream Theater would do. The musicianship is top draw, Aldo Lonobile (Secret Sphere, Archon Angel) and drummer Marco di Salvia (Hardline) joining with band founder and vocalist/keyboardist Alessandro Del Vecchio and bassist Nik Mazzucconi (Labyrinth) to make something that has a real band feel, and there’s that inescapable joy that this is nearly prog and just a little overblown.

The solos of Lonobile are thunderous, proper arena bothering stuff, and “The Other Side Of Pain” mixes its 80s theatrics, with more sailing than the Rhyme Of The Ancient Mariner. Where EOF really score though is in this sheer fact: whether its on the slower ones like “Made It Through” or the glorious, shining balls out rockers like the absolute highlight that is “Shift The Paradigm”, then they wrap their innate grandiosity around choruses and hooks that anyone can enjoy.

It’s a neat skill, one that only the best have. And Del Vecchio is one of the absolute best.

“Edge Of Salvation” has a dirty, near 80s sleaze groove, but the shades, the peaks and troughs make this, likewise his piano on “Breath Of Life” gives the texture. Reviving the power ballad is something we can all get behind, surely?

Credit to them too for doing effortless epics. “Wrong Dimension” is plonked in the middle like some mini film score of eight minutes, and “Our Battle Rages On” – perhaps written about the tribe the album is named after – provides the counterbalance of three minutes of energy.

Evidence that this is a band that thinks a little differently is in the last one. “Seminole” is split into four parts, and even though the words “Rock Opera” would have the majority of you running for the hills, this is out and proud.

It provides a superb, and somewhat unexpected, end to this too and those two words “superb” and “unexpected” could apply to the record as a whole, too. Thinking persons rock n roll? All of the above. Edge Of Forever have hit a career high here.