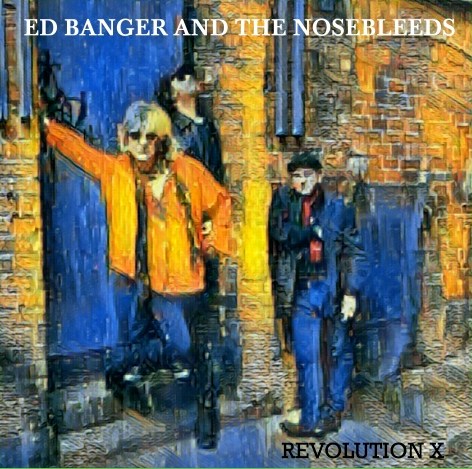 Back in the day, Ed Banger was known as Manchester`s answer to Frank Zappa.

His band are probably best known for members who played at various times and went onto further successful ventures such as Primal Scream drummer Toby Tomanov, Stephen Morrissey (The Smiths), Billy Duffy (The Cult), and Vini Reilly (The Durutti Column).

Singer / songwriter Ed Banger (Now Edweena Banger and identifying as a trans woman) originally reformed the band in 2013 and releases a new album this month `Revolution X` which is the follow up to 2017’s ‘Legal High’.

The album opens up with `Bite Back Rock n Roll` a  blistering introduction that is nearly The Ramones on speed. I can imagine a sea of raised arms with clenched fists pumping the air when shared live. There was almost a belligerence to `Nobody Tells Me` and at times it reminded me a little of The Damned`s  `Neat Neat Neat as it pounded away.

`Can`t Stand The News` has a real bluster about it with some cracking vocal harmonies and a   superbly subtle guitar solo thrown in for good measure. There was a kind of rolling rockabilly drumbeat and grinding guitar riff  throughout `Rolling Thunder` that will have you tapping your foot along to at the very least.

`Babylon` is a much more reflective stirring submission with a continuous piano beat running through and saxophone swathes where even the vocal seems more considered in its delivery. We have a powerful guitar riff underpinning the vocal on the thoughtful `Freedom` which rolls along.

`Walk Away` is a melodic punk offering with a chorus where the lyrics are rapidly and intricately sung. A scorching guitar strums and  bounces along the addictive `Worlds Collide` which will have you shouting along with the chorus.

`One For the Road` is a little different with thumped piano keys, a kind of retro mix match of Mott the Hoople and Steve Harley`s Cockney Rebel. A reflective rock n roll number that becomes quite hypnotic and fades with a pensive saxophone tone. Grungy guitar chords lead us through `My Kinda Rocker` which bobs along. A track that longs for times gone by and the addition of delightful saxophone colours adds a certain poignancy.

`Love Of the Night` sounds as if  it`s recorded live. It strolls along in a kind of a jam and brought to mind trailblazers such as Iggy Pop and early Bowie. Unashamedly and delightfully retro rock n roll. We have a veiled tribute to The Rolling Stones with `Rolling Stoned` that has that bluesy rock  Stones swagger about it. Subtle references to  `Jumping Jack Flash`, `Street Fighting Man` and a chorus of  `Let It Bleed` are all cleverly slipped in throughout the piece. As Mick might say, it maybe Only Rock n roll but I certainly liked this.

I thought `Riding the Whirlwind` was a quite dramatic nigh on theatrical song that could have been integrated quite easily in the Rocky Horror Picture Show. The album closes out with `Blinded` a track that has punk at its heart with a buzzy or fuzzy guitar underpinning it as the vocals float atop and around.

I knew the name Ed Banger but I have to own up and say I wouldn`t have been familiar with any of their musical content so I was elated with what I heard on `Revolution X`. It`s a mix of punk with a glam shimmer and a real rock n roll bite. `Revolution X` certainly was a revelation for me. If you want some heads down, no nonsense punk ‘n’ roll, Ed Banger and the Nosebleeds offer up the premier league version here.