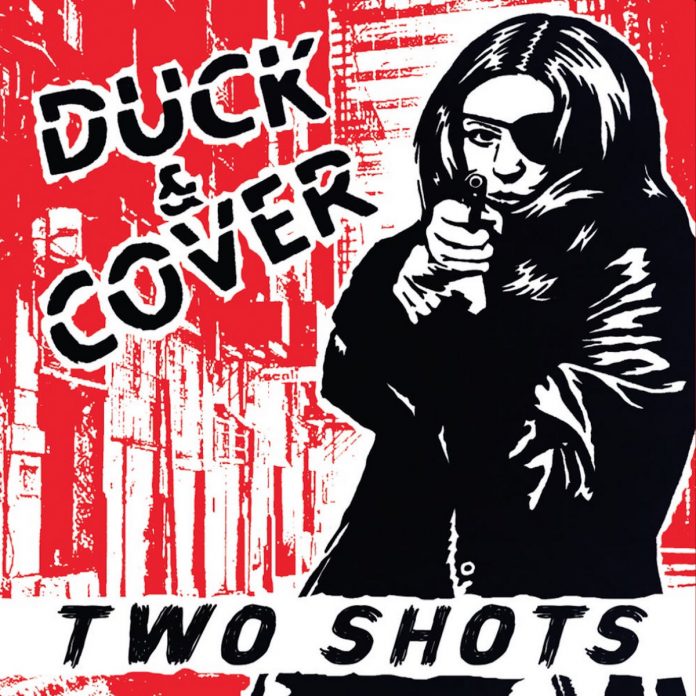 At the end of 2018 I reviewed an EP by a Boston, Massachusetts band called Duck And Cover. I liked it. Nah, actually, I loved it. I think I gushed something like: “it reaffirms why you loved rock n roll in the first place and, moreover, why you will continue to love it as long as it exists.” Just so you know the kind of ball park we are in……

Well, now they are back. Damien, Daniel, Rich, and Chris, who rather modestly bill themselves simply thus: “playing rock n roll” on their Bandcamp Page.

Yeah, they do. But, so do a million bands. To be rock n roll, rather than merely play it, now that’s a challenge.

“Two Shots” is not just a three track EP. It’s a journey into debauchery, “each time you kiss me,” sneers whichever one of them does the singing (its actually completely wonderful that they literally just deal in first names, like Cher) “its like two poisoned shots of whiskey”. Deal with that. That’s rock n roll, writ large.

Then it’s a journey back twenty years: “Bleeding Edge” is arguably even better. Like either the best song The Professionals never wrote, or the sort of bass groove driven thing that would have had me sending all my money to the mail order record clubs I was in, in the late 90s (take your pick).

Or, it’s a trip to something slightly more Heartland USA, as it were. The last song, “Unlucky 17” has all the signposts of The Replacements, but the Thin Lizzy fans amongst us (and if you aren’t, then shame on you) might enjoy the solo.

Ultimately, though, “Two Shots” is whatever you want it to be. Duck And Cover are a brilliant exponent of punky rock n roll, but somehow, beyond that, they just seem to be four men who just love music. Theirs, or anyone else’s and that love comes through loud and clear here.