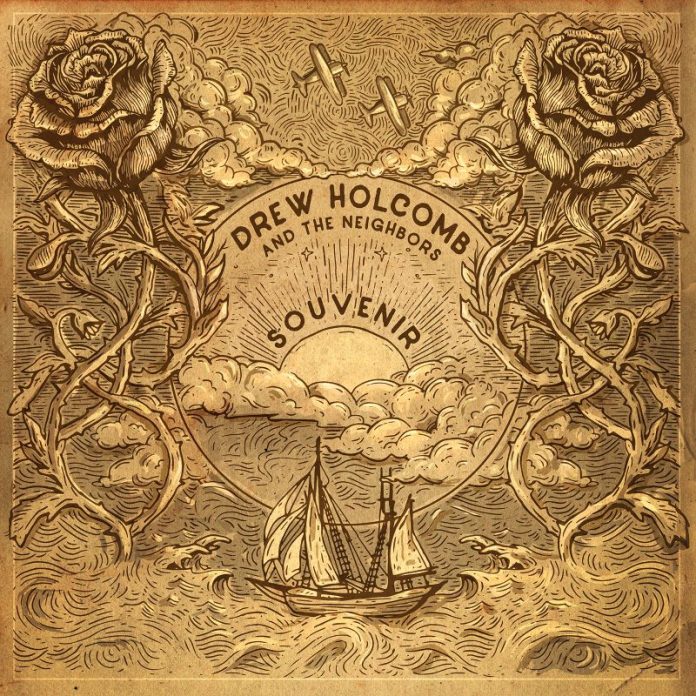 Waking up the Neighbours?

It is something of an irony that “Wild World” – the last song on “Souvenir” with the fabulous first line: “I don’t know about you/but I like to tell the truth/but the truth seems to change every Tuesday” – starts with the sound of a passing ambulance and its sirens blaring.

Ironic, because just as the song – sort of Holcomb’s state of the union address, if you will – was finished, the man himself was diagnosed with a rare form of Viral Meningitis. Enough to delay the release, you’d guess. Not a bit of it. Instead Holcomb handed it to his band mates and here it is.

That is important to the overall feel of the record, but it is just another step along the road of collaboration that is shot through “Souvenir”.  There are more songs on this album that are either co-written with, or written by, bandmates. The result is a warmer, more varied and downright fabulous LP, than his previous work.

This is perhaps natural for an album which has love as its central pillar. Whether that’s physical as on “Morning Song” with its opening couplet “I wanna make love after midnight /and fall asleep in your arms”, or for a place, as on “California” or on the aforementioned “…World” which preaches a simple message of compassion and tolerance. And, goodness how we could do with that now.

This message – effectively “love conquers all” – is made most explicit on “Fight For Love”, but it is the manner of these songs that are most interesting.

Happy to be Ryan Adams at his most weatherbeaten and weary, there are harmonica flourish’s that suggest Springsteen too, while on “Rowdy Heart, Broken Wing”, it is stripped down and half-cracked vocals.

Indeed, there is a suggestion of chance taking throughout. “New Year” is built around a drum machine loop, like Steve Earle in his “Washington Square” Serenade period and “Sometimes” which follows with its mournful piano stylings and lap steel, is something for the middle of the night when you are alone with all your regrets, but the use of stack harmonies here take that into a different realm.

Family is important here too. The brilliant “Mama’s Sunshine, Daddy’s Rain” with its country strut is – you assume  – about a child, while the gorgeous “Black And Blue” is a duet between Holcomb and his wife.

Some of the real highlights here are the subtleties. “Postcard Memories” is warm, sun drenched and understated folk and “The Yellow Rose Of Santa Fe” – a superbly evocative classic country song written by band member Steve Dugger.

This is a collection for all of them. But it is more than that. It might be Drew Holcomb’s band, but this “Souvenir” belongs to everyone.