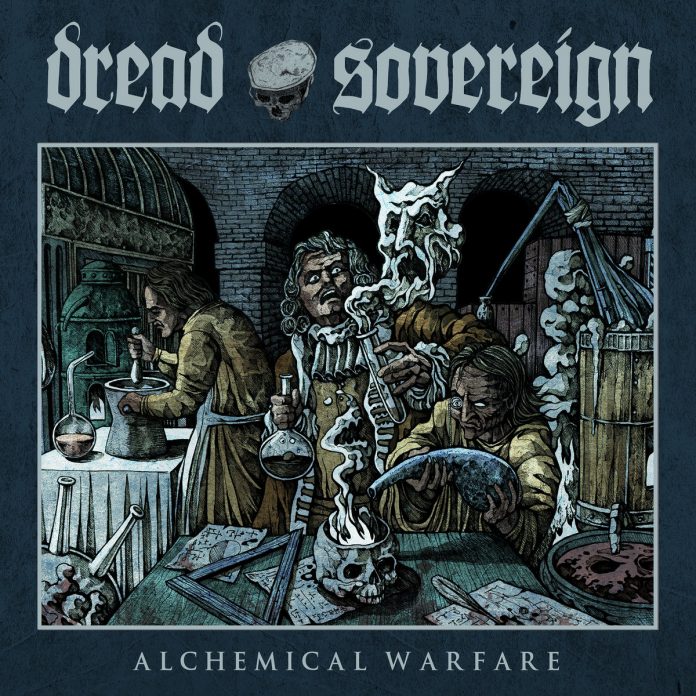 Dread Sovereign have been a going concern now for over a decade since their creation in Dublin, Ireland and in that time they have released one EP and two previous full-length releases.   They have built themselves up a decent following and the anticipation for a new release was increasing.  The time for waiting is now over so how does the album stack up?

“A Curse of Men” is a short opening mood setter that leads into the trudging heaviness of “She Wolves of the Savage Season”.  As the first track proper it leaves the listener with plenty of indication as to what lies ahead.  It’s is suitably dark, with a slow burning riff and double-bass pounding that builds as the track progresses.

Following on with “The Great Beast We Serve” they step into another gear.  It is by no means full throttle but is led by a stark swaggering riff that, after a drawn-out 60 seconds or so, comes into life with the howling vocal display and doom-laden intentions.

“Devil’s Bane” is as close to old school heavy metal that Dread Sovereign get and it’s a welcome change of pace from the preceeding tracks.  The mid-section slows down to a crawl before ramping back up to maximum velocity and finishing with a fiery flourish.

Bones on guitars and Con Ri on drums are the heartbeat of the music and their eerie and demanding soundscapes allow Nemtheanga to control and explore his vocals, with bass duties included, to their full extent.

The penultimate track “Ruin Upon the Temple Mount” is arguably the best of the bunch. It is eight minutes long and in all honesty doesn’t really kick into any sort of gear until the halfway stage but when it does it is something for the ears to behold.

The album is signed off with a Bathory cover in “You Don’t Move Me (I Don’t Give A Fuck)” that would do the Swedish Blackened Metal legends proud.  They take the pure fury and dissonance of the original and encase it in a modern music black hole from which nothing escapes.

Following up on 2017’s For Doom The Bell Tolls would have been a tough ask in current circumstances but the band have delivered their most coherent and well crafted album to date.

Alchemical Warfare is out now via Metal Blade Records.