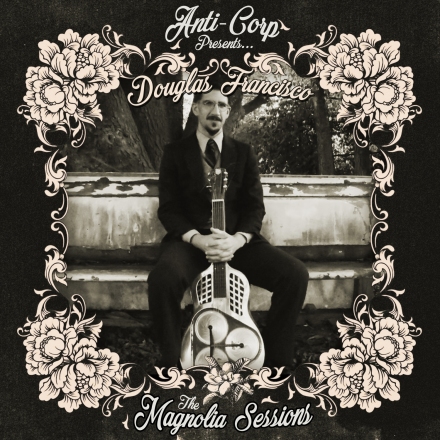 Another new month means a further instalment of The Magnolia Sessions with this month`s artist being a new recording from Douglas Francisco. After seven years braving the hazards and solitary toil of a lumberjack and having recently played his National Tricone lap steel on the new Lost Dog Street Band album, `Glory`, he steps briefly away from his band, Shaky Barbers, to deliver a few cuts for The Magnolia Sessions. On these recordings he was joined by renowned New Orleans string player Ben Fox, who brought along his viola de gamba, along with his double bass, and Keith J. Smith of Resonant Rogues who played snare drum.

The session opens with `No Light At The End Of The Tunnel` with some lightly brushed percussion and quietly shared guitar licks which at times are almost competing with the distant background traffic noise. A strummed upright bass joins in and all three softly lead us through this wonderfully reflective instrumental number. A brushed drum and what I take to be the viola de gamba lay a base for the singer`s delightful almost dead pan vocal delivery on `Room Full Of Roses`, which works so well on this outpouring of love and affection. A number that will truly captivate you and the last line in the song “so if someday you`re feeling blue, and you could send some roses too, I don`t want a room full of roses, I just want my arms full of you” is exquisite.

`Lucky Penny` to me had a feel of the superb klezmer tunes that I have been lucky enough to occasionally come across for the most part before taking a curve and becoming more of a thoughtful bluesy musing. My mom, who is sadly no longer with us would always guilt trip us with “will you put flowers on my grave, when i`m dead and gone” so this track `Flowers On My Grave` really resonated with me spiritually and brought back memories of my wonderfully crazy Irish mother. It had a slight feel of the late great Hank Williams number `Hey Good Lookin“ or maybe that was just me .

`If Rain Is What You Want` is an account of somebody travelling the world but constantly thinking of their special someone and concluding that they`ll do whatever it takes to please them. It strolls along and has some intricately shared chords during the midsection. The narrator relays that he`s no fan of that star or ball of hot plasma which supplies us energy and life in `I Hate The Sun` and just wants it to stay well away from him. A charmingly amusing tale shared in a laid back bluesy musical outing.

` Exile` has a really interesting edgy feel about it as it rolls along. The drum skin is fairly slapped and along with a double bass tone we have some intricate guitar chords that weave in and out as the number evolves. I thought `Over And Over` was wonderfully hypnotic. A brushed and tapped snare lays the foundation and pace as the doble bass accompanies it as the narrator mulls over his tale of contemplation of all the pretty bad things he`s done, although he doesn`t mean to. There are some superbly complicated guitar riffs during this reflective journey, where you really feel that you are there alongside the incumbent.

`Listening To The Rain Fall` is joyous in its simplicity as the narrator relates a very ordinary everyday occurrence but expresses it so clearly that we feel we are there as well. A double bass brushed snare and guitar inflections hold our hands as we listen to the quite melancholic narrative. There`s a nervy tension to `Blasphemy` where the author seems to be searching for divine intervention from either a good or evil deity. The result is left for your own determination as to which path he chose.

`It’s Bad For Me` has a chant like quality about it that will really bewitch you and suck you in on this slightly off key trek. This session closes out with `Time Alone Will Tell` another track that will draw you in akin to Mary Howitt`s poem where a spider entraps a fly into its web through the use of seduction and manipulation, It`s a soothing but enchanting listen.

The three musicians came together from different parts of the country Washington, North Carolina, and Louisiana and it`s hard to believe but the instrumental tracks were improvised. Douglas Francisco offered us some stunning numbers here which at times had some deliciously dark overtones. His voice ebbs and flows and is gentle one minute and much more potent when required. It was almost like an iron fist in a velvet glove, The only disappointment i had was that it was so early in the season that the crickets and cicadas weren`t yet in full flight. I`ll leave the last word to the artist himself when he shared that he “Quit playing heavy metal years ago to play the steel. Influences?..Slayer, Marty Robbins, Scott Joplin, Astor Piazzola…though I play none of it..With my band we explore what the steel guitar can do outside of American music, across the world and beyond…”. To me Douglas Francisco will become a National Treasure and i`m grateful to Earsplit PR, Anti-Corporate Music and Black Matter Mastering for introducing me to another undiscovered gem.

Let them do the same for you