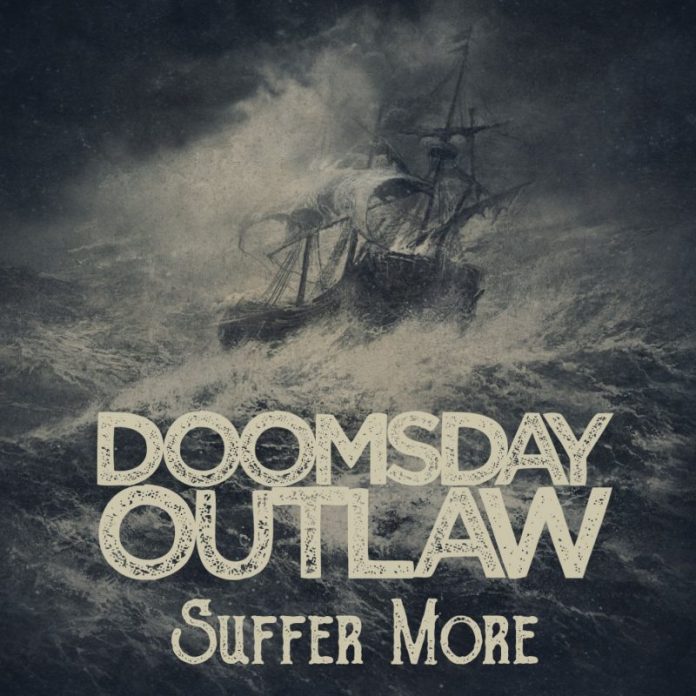 Last year, an album arrived in the MV inbox from an East Midlands based band called Doomsday Outlaw.

It said all the right things to get us excited. It namechecked the right bands in the press kit that came with it, but moreover the record was absolutely knockout brilliant.

In fact, so much did we like the record, a month or two after it came out we caught up with the band’s bass player Indy for a discussion about it.

Amongst the usual stuff, the four stringer said that the band were already working on things for album two and it would probably sound different from the “Black River” opus. At the time, to be honest, we put it down to one of those things bands say. It turns out we were wrong and Indy was right, because it’s a very, very different beast that is before us on album number two.

That means literally and figuratively. Literally because “Suffer More” is the first record for new singer Phil, but with due respect to him and the formidable shift he puts in here, the figurative is rather more crucial here, because the sound of “….More” is that of band that has thrown off any shackles they had before.

For one thing its incredibly long – clocking in at 14 full length songs. For another, it is just plain and simply incredible.

In that chat last year, Indy said the band he most wanted to emulate was Black Stone Cherry. Opener “Walk On Water” makes good on that ambition and constructs a riff and groove that quite fancies his arena rock lark, thank you very much, but this record is far too busy trying things out to admire its work.

“Fallback” likes the idea of a massive, swaggering groove, but it adds a soaring chorus to the mix while its about it. It’s the song that follows, though, that finally convinces that you are listening to something a bit special. “All That I Have” is a quite brilliant effort that nods at everything from Screaming Trees to The Allman Brothers and is the mark of a band with a total mastery of their craft.

If that is the high water mark here, then the rest, believe us, is a gold plated triumph. A record that keeps you guessing and one which you never quite know what to expect, twists and turns, shimmys and shakes its way through, the enormous balladry of the title track, a punk rock thrash about, appropriately called “Pandemonium”, there’s even a trip back to the southern swamps that the debut inhabited for the glorious fun of “I’ve Been Found” – which wouldn’t have been out of place on The Answer’s tour-de-force of a debut record.

It goes on, never pausing for breath along the way, “Bring You Pain” rocks the cowbell and sounds like the best track Thunder didn’t write, “Blues For A Phantom Limb” would make The Black Crowes green with envy, while a song as good as “Saltwater” quite simply makes everything better.

The surprises too, just keep coming and its almost as if no idea here was rejected. “Standing Tall” comes on like Tom Petty, but even for an album with as much to say as this one the fact DO can get as mean and menacing as the Alice In Chains infused “Wait Until Tomorrow” is still a shock especially as “Running Into You” is stripped back, lilting gorgeous acoustics, and provides a wonderful counterbalance.

“Suffer More” is astonishing. You won’t hear a more varied record this year. You probably won’t hear many better either. What Doomsday Outlaw have in mind for album number three, only they know, but such is their talent  don’t back against them bettering even this.