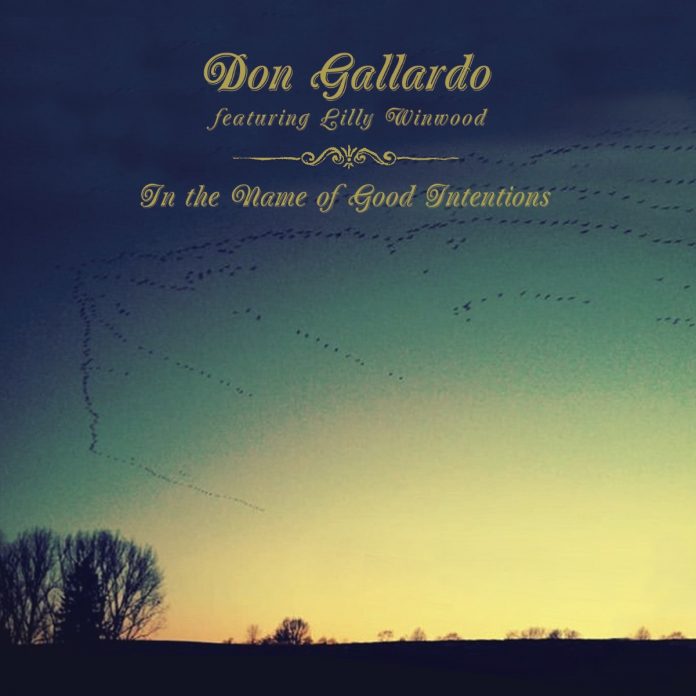 Don Gallardo is an American Singer-Songwriter, raised in a small town in Northern California, where he spent years building his song writing career before relocating to Nashville in 2007. He plays Americana / Country / Folk Music strumming his way around the globe. He has a new seven song extended play featuring new original music and a cover and on four of the tracks British/Nashville singer songwriter Lilly Winwood is featured.

`Rhyder`s Song (Along The Way) ` opens this offering and it`s a wonderfully melodic piece. The song is intensified with some lovely violin / fiddle inflections and both Don and Lilly`s vocals blend together as if they had been singing together for years. When I saw Don in July, he dedicated this to his six-year-old boy, and it seemed to be about wishing the best for his son and really just wanting him to be happy.

There is some great vocal interplay on `Shine A Light On Me` with its tinkling keyboards, underlying percussion and occasional brass section. A track that will have you singing along with it`s catchy chorus.

`How Many Days` is a lot rockier and I have to say this was my favourite cut. Lilly and Don`s voices intertwine delightfully sharing the questioning lyrics. The organ and brass snatches along with the steel guitar and guitar riffs really escalated this to another level.

The duo cover a stripped back version of Creedence Clearwater Revival`s classic `Bad Moon Rising` and their harmonic vocals complement each other, you can almost feel the fear in the warning of impending doom in their delivery. The acoustic guitar adds an almost unnerving rawness.

`The Storey Of Tom Paley & The Betsey Trotwood` opens with some terrific brass on this tale of reminiscing. I`m not sure of the relevance of the title but Tom Paley was a renowned guitarist, banjo and fiddle player and Betsey Trotwood a fictional character in Charles Dicken`s novel David Copperfield.

So maybe is has something to do with the nostalgic nature of this song which has some sublime guitar riffs and even a whistling solo towards the end.

When I saw Don earlier this year, he encouraged the audience to clap along as backing to `Devil Gonna Come` which made it feel quite unsettling and here again this short foray has handclaps with some distant voices giving it a superbly disquieting feel. The album closes out with the laid back, quite melancholic `The Wanderer` There were some delicate piano nuances and understated guitar refrains to enrich the positive message shared in this submission.

This was a terrific offering from a gifted singer, songwriter and musician. The addition and contribution of legendary Steve Winwood`s talented daughter Lilly was particularly inspired and innovative. They really complemented each other. This was a heartening slice of folk come Americana cut right through with some optimistic lyrical content. Rolling Stone referred to Don as “A singer-songwriter that is one of the Country and Americana scene’s true journeymen.” I found that sentiment a little disparaging as Don is so much more than that. To me he is a craftsman rather than journeyman.