If the Apocalypse is upon us then legendary hardcore punkers, Discharge, are not going to go without a fight. 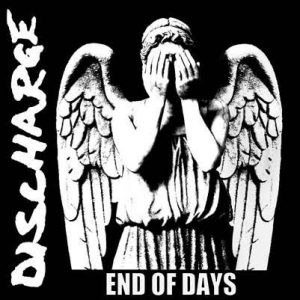 After a mohawk-sized eight year album gap the UK’s most revered and ,occasionally feared,  hardcore punk legends Discharge have returned to reclaim their place at the top of the pile.

The band first began providing GBH of the earhole back in 1977 and this is their seventh full length studio album.  The band have split and reformed various times in the past 40 years or so and have been a massive influences on bands such as Metallica, Slayer and a whole host of heavy punk bands that followed.

The band have gone through the usual line-up changes that bands of a certain vintage are allowed by law.  Their ethos hand style has always remained intact and 2016 sees them bring a new level of power and intensity to an already formidable back catalogue.

“New World Order” is the album opener and it flies out of the traps like a greyhound with its arse on fire.  “Raped and Pillaged” follows suit and the pattern is set.  By the time the title track has arrived the band have settled into a controlled brand of aggression that administers beatings at a ferociously rhythmic pace.

These tracks are musical handgrenades that the band casually, but forcefully lob onto the modern music battlefield.  Their targets are often random and various but their aim is always spot on.  Take “Hatebomb” for example, a finer two minutes of pent up anger and frustration you will not hear all year.

Frontman JJ Janiak’s vocals are placed right at the forefront and are powerfully, and skilfully,  delivered on this his first album proper with the band.  All the tracks contain the same vibrancy and energy that is part of the Discharge DNA and that alone ensures the album never takes a backward step.

The album, spread over fifteen tracks,  delivers what a Discharge fan would want.  No thrills but all kills.  There is a reason why the vast majority of heavy metal/thrash/punk bands cite Discharge as an influence.  It’s not difficult to spot when you take End of Days out for a spin.

Whilst they can never be accused of Bowie-like re-invention, they do, in their own way, continue to push back the boundaries and break down the walls of modernity through force of will, talent and damn fine hardcore punk.  If this is the soundtrack to the end of days………..then it’s fine way to go.