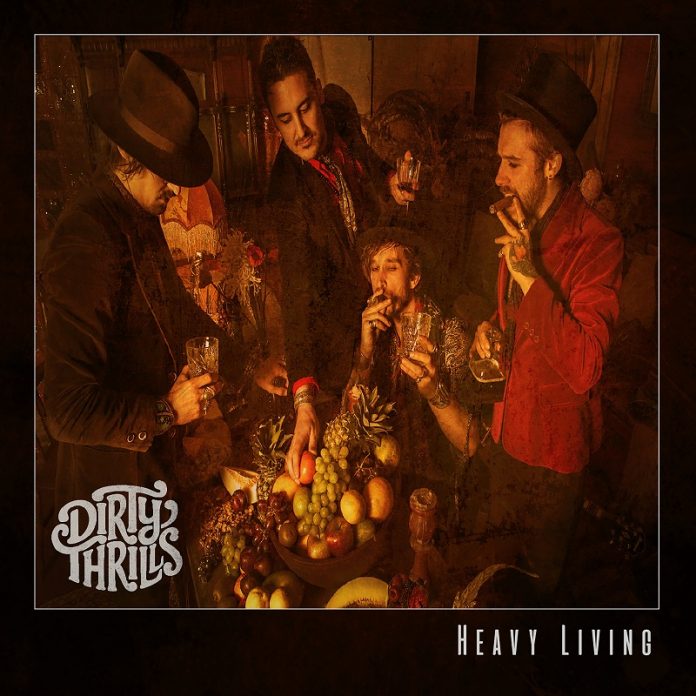 Opulence with a sleazy side

If you’re looking for a handle on Dirty Thrills, then skip to the interlude just after its halfway point. An odd place, perhaps to start, but after the 1 minute and 44 seconds of what sounds like some sort of Yoga meditation stuff from Louis James, something very important happens.

And it’s that the intro to “The Brave Part 1”, fair old slams into view. You’ll not find better proof that the London based quartet meld real raw rock n roll with something altogether more mystical.

The band formed in a pub in Wiltshire, and that laid-back small-town vibe is all over “Heavy Living”. “I’ll Be With You” comes out swinging (Rival Sons reference intended) with a huge groove. But for DT having a huge groove throughout the song isn’t the thing. Instead by the chorus there’s a soul imbued side to them which is reminiscent of a British Blues Pills.

That rather sets the template for what follows, “Go Slow” has an intro that Black Keys would be pleased with, while “Law Man” begins with a gunshot drum beat from Steve Corrigan and is propelled to other places by Louis James’ soaring vocals.

Essentially a really heavy blues band at heart – think Led Zep – “Hanging Around” is a funky affair, albeit one with a mighty swagger, but there is a real deftness of touch here too, as the ballad “Lonely Soul” proves.

A deeply personal song to James, it was on their acoustic EP last year in another format, and is the work of a band with maturity and skill beyond their years. The solo here from Jack Fawdry is superb.

Another on the acoustic record “No Resolve” is absolutely transformed into a real thumper, while “Rabbit Hole” has altogether more psychedelic intention. Whatever they do, though Dirty Thrills do it with a class and ambition.

The band formed with the aim of “taking rock back to the glory days”. It’s fair to say those days, in the opinion of the four are from the late 1960s and early 1970s rather than anything since, “Drunken Words” has no idea that the 21st century has happened and largely that is to their credit – as is the fact that every single one of these 11 songs sounds like it is driven with a desire to get laid. There is something – and on occasion it is imperceptible – downright sleazy about this. But when was great rock n roll not sleazy?

Things end with something of the garage about them, as “Get Loose” lives up to its name by wiggling its hips and clasping its hands as if it’s the most natural thing in the world. And when you get down to it, “natural” is the best word for this album.

“Heavy Living” is basically the sound of every primal urge that rock n roll has ever had from the minute Robert Johnson went to meet the devil and Elvis decided to record a song in Sun Studios, but with a star quality to it too. The band that formed in the pub have a sound destined for arenas.