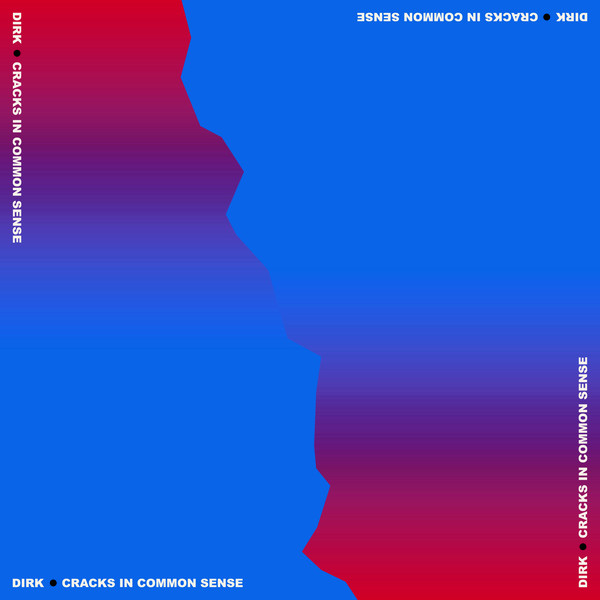 DIRK are currently Belgium’s most popular indie act, made up of Jelle Denturck (vocals/bass), Frederik Desmedt (guitars). Pieter-Willem Lauwers (guitars) and Robin Wille (drums). Their debut album called “Album” came out in 2018 and they now have the follow up with “Cracks In Common Sense”

The album kicks off with `Priceless` and just as it seems to get going it ends abruptly but what little there was, fifty-two seconds in fact, had a real feel of alternative rock band The Pixies about it. There`s crashing guitars and hollered vocals on `Counterfeit` before it levels out and races along with a really catchy vibe. We enjoy driving guitars and a thumping drum beat as the captivating vocals are hurtled atop. It tries to veer off this path at times before ending in a screaming cacophony of sound.

`Hit` is bass led and has quite a bouncy texture about it, a mid-paced indie rock out with a chorus line of “you can see me falling apart” that is ripe for singing along to at a live gig. The other lyrics are quite eclectic with a mention of condyline for some reason, which is used to treat anogenital warts. There`s a lighter feel to `Small Life` but again it`s another number that has an enthralling aura.

`Artline` has been described as blurring the lines between slacker rock and post-metal, which is a fair description. Again, we have pounding bass, thumping drums and frenzied guitar riffs with singer Jelle trying to compete with this wall of controlled noise. I felt `Golly` had a real art rock feel at the start, veered towards being anthemic and then ended up quite grungy.

`My Dog`s Dead / The Only Way Is Out` a strange title for a song which is quite poppy apart from some quite annoying screeching feedback shared at times throughout. A thirty second snippet of somebody talking to a television is shared with `Come On TV`

DIRK have been compared to geek rock come emo band Weezer and I hadn`t heard it until `Komrad Shoes` which does have a slight flavour of this outfit, with it`s charming guitar chords, melodies, and lyrical content. The faster paced `Toulouse` is another alluring offering that seems to relate to a romantic breakup and a play on the similarity of the word Toulouse and to lose, cleaver stuff.

`Pastime` had a much more punk feel about it, another track that had an engrossing identity. The album closes with another odd choice in `Mother` a quite stripped back composition with drums, a bass line and guitar clearly defined with a one liner of

DIRK are quite an idiosyncratic band that play a brand of indie come post rock with some lively melodies and fierce drum, bass, and guitar surges. Their lyrics are a little off kilter at times but affect a certain charm. “Cracks In Common Sense” is an interesting release and one that needs a few listens before it really sinks in.

I remember loving the only other Belgium band that I can remember seeing from decades ago, the experimental dEUS and they did ok.

So, I have a fairly good feeling about DIRK.