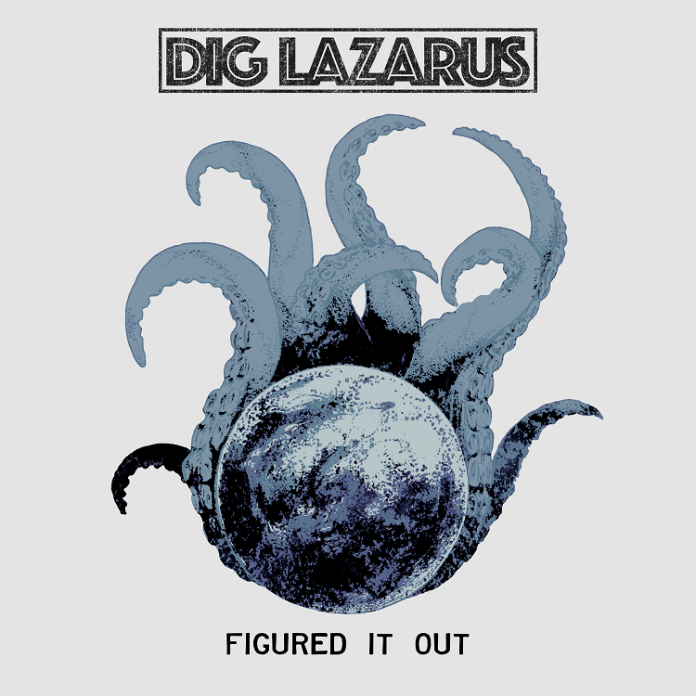 First, I assumed they were going to sound like Nick Cave. (and if you haven’t heard “Dig Lazarus Dig” when you’ve finished this EP get on that).

Then I heard the opening riff of the opening track “Joker”. I was in my car on the way home from a gig. It came on and involuntarily I start going: “Well, I’ve been watching, while you’ve been coughing” – and crikey, I thought, these don’t half sound like Audioslave.

They don’t (well, apart from that intro anyway….).

So now we’ve established what they’re not, lets talk about what they are. In the words of bassist Atticus: “”We’ve been playing together for almost 8 years now and, whilst we’ve recorded tracks here and there in the past, this EP “Figured It Out” really feels like a new beginning for us. Everything we’ve learned from songwriting tricks to production tips has been used here and we reckon it shows. We’ve poured a lot of rock n’ soul into it, crafting something we’re really proud of. It’s got four of our favourite songs packed onto the disk ready to blow your ears off”

Essentially, DL have come out of the Midlands with a real feeling of “lets do this, shall we?”

After “Joker” – which is the ace in the pack by the way – comes “Tell Me Why” and those of us that like Tax The Heat will find much to enthral here in truth.

Throughout the whole of “Figure It Out” TTH were a name I kept coming back to. Like Alex Veale’s boys, this is a band that isn’t going to fit neatly into a box, because for all the catchiness on offer, then “Get Out” still has a thunderous bass groove, a hum and a pulse – and still manages to sound like a modern rock song, not a retro “classic” thing.

Indeed, the very last one, “Outlaw” switches it up again. Harder edged, if not quite metal, then it walks into some darker places, and has a different vibe to the rest.

From the same stable as Massive Wagons, there is a feeling that this could be some kind of watershed moment for Dig Lazarus. A breakthrough might be in the offing.

Here, if I wasn’t able to figure it out, is a band that most definitely finally has.

Previous article
RAGING IN LONDON
Next article
METALLICA POP UP