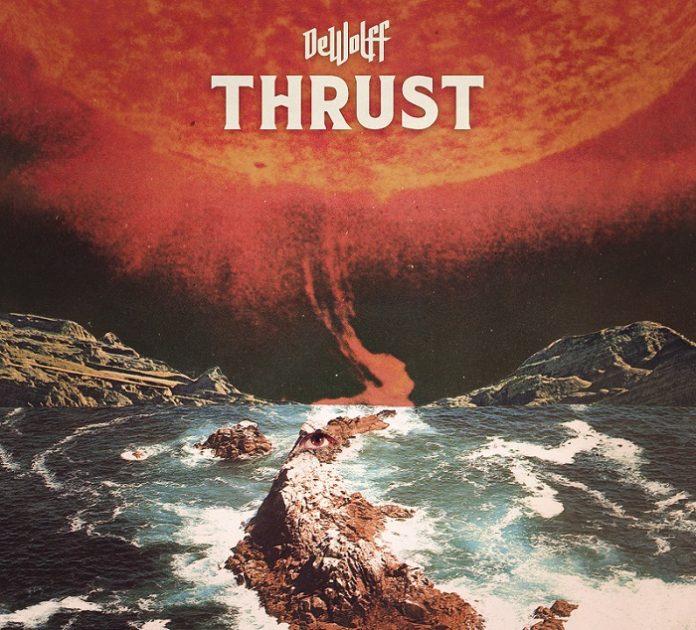 The first decade for DeWolff wasn’t bad. Roger Glover loves them, Seasick Steve dreamt they were The Allman Brothers (apparently true) and they’ve met Robert Plant. More pertinently they are major stars back home in Holland. Five albums at the top of the charts and a festival to celebrate their tenth anniversary.

Now, with “Thrust” they are making a bid to build on that and take the sound to the whole world.

The first thing to say about “Thrust” is that it doesn’t actually, well, thrust at all. It meanders somewhere between blues, soul and psychedelics, and moreover it is often said a band is born out of time. Well, that is certainly true of DeWolff – it is meant as a compliment (and would no doubt be taken as one too) to say that these 11 songs have no interest in sounding like its 2018 whatsoever.

That being said, the opening track “Big Talk” has its lyrics rooted in the here and now. Specifically, the rise of the Dutch right-wing idiot (and yeah, we’ll happily publish that) Geert Wilders, but you can – if you just want to enjoy the music – do that.

Fuzzy, and sounding like an American band rather than a Euro one, and its authentic too, given that the band record in their own analogue studio, but it’s true skill is where other bands (hello, Rival Sons!) might disappear into lengthy jams, DeWolff don’t.

Instead, they inject a sense of urgency by having minimal gaps between cuts, meaning that even the likes of the organ heavy rocker “California’s Burning” or the soul drenched – and absolutely gorgeous – ballad “Once In A Blue Moon” just keep coming at you.

And, these boys can write a catchy 70s infused stomper at the drop of a hat, it seems. Never better than “Double Crossing Man” – which is shot through with the spirit of John Fogarty and CCR. Under three minutes too, it is close to perfection as you’re going to get.

“Tombstone Child” is an arena rocker in waiting, and dare we suggest that if it was on a Lenny Kravitz record then he’d have another gold disc on his wall, and “Deceit And Woo” – apparently written on the day of Trump’s inauguration – is back to the political. It slams too, if politics ain’t your bag, and it does a really nice blues thing for kicks.

“Freeway Flight” on the other hand, with its odd harmonies, is first gentle, but moreover proof that they’ll do things in their own way, while “Tragedy Not Today” is the sound of a band who is totally comfortable in its own skin.

A rock influenced album, but so much more, “Sometimes” even nips off down some path signposted reggae for a wander, “Swain” wouldn’t be amiss on some Motown compilation from the 1960s, while the brilliant closer “Outta Step And Ill At Ease” is exactly the sort of thing Seasick Steve had in mind when he said they were like the Allman Brothers.

DeWolff are – so they claim – outta step and ill at ease in la la land – and if I was to hazard a guess I’d say “la la land” was the world in 2018. Who can blame them either, for looking back to the past to find some relevance in the present? “Thrust” does. Lyrics from today, music from last century. It is a brilliant combination and it makes for a fabulous album. And one that sets up their second decade just fine.