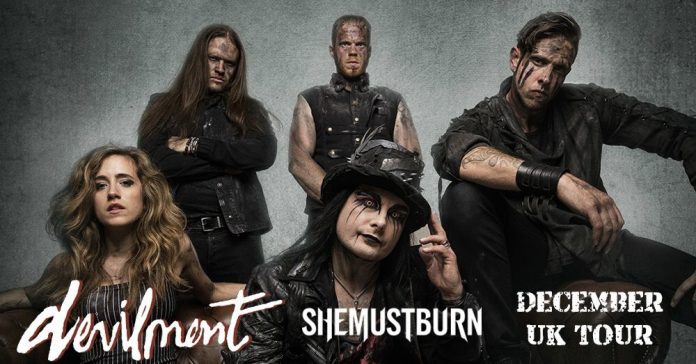 A mid-winter Wednesday night in Nottingham may not have brought out the masses but the one hundred or so blackened souls who inhabited the basement at Nottingham’s Rock City tonight were more than ready, willing and able to get their demonic fix before the yuletide festivities begin.
With a stunning new album to promote a short UK tour is the ideal way for Dani Filth and his band to see out the year. Your intrepid reviewer gave the band’s second and latest album “The Mephisto Waltzes” a triumphant 9/10 on the website a couple of months back.  It’s sure to feature in the websites annual Album of the Year list.  The question is can the quality of the album be replicated live?
Kicking things off in darkly resplendent fashion with “Judas Stein” it appears that any such notion of a less than stellar performance is sheer folly.  This band led by Filthy Dani, backed superbly by the rhythmic duo Matt Alston (drums), Nick Johnson (bass), the eerie but beautiful vocal tones of keyboardist Lauren Francis and the guitar attack of Colin Parks, maybe be a side-project of sorts but it is nonetheless a very serious musical proposition.
When the groove of “Hitchcock Blonde” runs into the razor-sharp riffage and sonic beatdown of “Summer Arteries” then it’s clear, even through the smoky darkness, that something hauntingly special is occurring.
“Hell At My Back” is a rampaging irresistible force slamming into a hundred moveable head-banging objects.  This band are impossibly tight and every riff and beat has the walls shaking and the ground breaking.
Lauren Francis’ tinsel-covered keyboard ensures a festive atmosphere is in place, so to the cheery disposition provided by the mainman himself.  He appears to be thrilled as his talented ensemble and the music they have created.  Rightly so.
“Sanity Hits A (Perfect) Zero” is a standout amongst a set full of modern day creepy classics.standouts.  “Shine On Sophie Moon” is furiously majestic and anthemic and gets the crowd, who by now are fully immersed in all things devilish.  At their heaviest they are as good as any band on the planet, and the few that aren’t,  and at their more atmospheric moments they truly chill.
When the encore arrives it begins in the twisted shape of the glorious “Even Your Blood Group Rejects Me” and set closer “Under The Thunder” is a final shot across the bows and seals the deal on 1 hour and 15 minutes very well spent.
Donnie Rating: 9/10