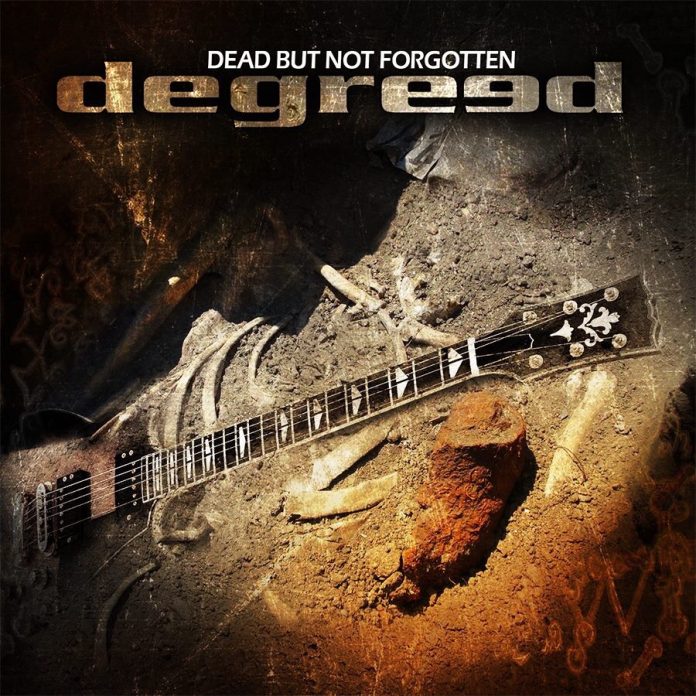 AOR for the 21st Century

It’s an odd thing, as the band H.E.A.T observed in one of the magazines the other week, but the way the UK considers AOR is totally different to how it’s perceived in Scandinavia. It’s still – despite the continued success of bands like FM – viewed as a bit of a laughing stock over here. Dated, consigned to the last century and the domain of a few people who still cling to their poodle perms and parping keyboards.

No one evidently told Degreed this.

The Swedes not only rather unashamedly make this record – third third – but on “Dead But Not Forgotten” they seem to revel in it.

“…..Forgotten” gets cracking with “The Scam” is a dark, heavyish tale of love gone bad. His woman has done Robin Ericsson wrong and thus everything is good in the AOR world. Lyrically this type of music, historically, only had two themes. Being happily in love, or being heartbroken, and so it goes here.

“Face The Fact” and “Madness” come and go in a swirl of power chords and keyboard from as choruses bury in and “Shame On Me” begins with a synth riff not heard since Europe’s second record.

The point here is quite simple. There’s not a shred of anything approaching original around, but neither Degreed or the fans that this record will get them could give the remotest thought for such triviality. “Better Safe Than Sorry” has such life about it that it doesn’t matter. Not that this total pastiche. “Love Me, Love Me Not” adds a modern sheen to its balladry, sounding not unlike HIM as it does, and “Touch Of Paradise” has a kind of crunch around its “woah, whoa’s”.

Largely, though, the fact you’ve heard this all before doesn’t stop it being tremendous fun. The beat way is to immerse yourself in it feet first, “Forgive You” might be about as cutting edge as the Val Doonican Christmas Record, but it’s excellently played and lovingly conceived, and the same goes for “Start Again” – which is the stand out cut on the collection. A dirty bass groove, a catchy hook, and a soaring chorus add up to a very satisfying piece of work, while “Firefly” pulses with a real urgency.

There’s a further stab at parping at breakneck speed, with “Final Ride” and then things wind down with the piano led groover “Turn Around, Don’t Back Down” which is a tale of defiance that neatly sums up the whole record.

You’d imagine that even in a place where AOR is more successful and better received it took guts to eschew everything else and make this music at the outset of the band. That this is their third album shows that Degreed will not deviate from this path. Those looking for some decent AOR a modern twist need look no further.