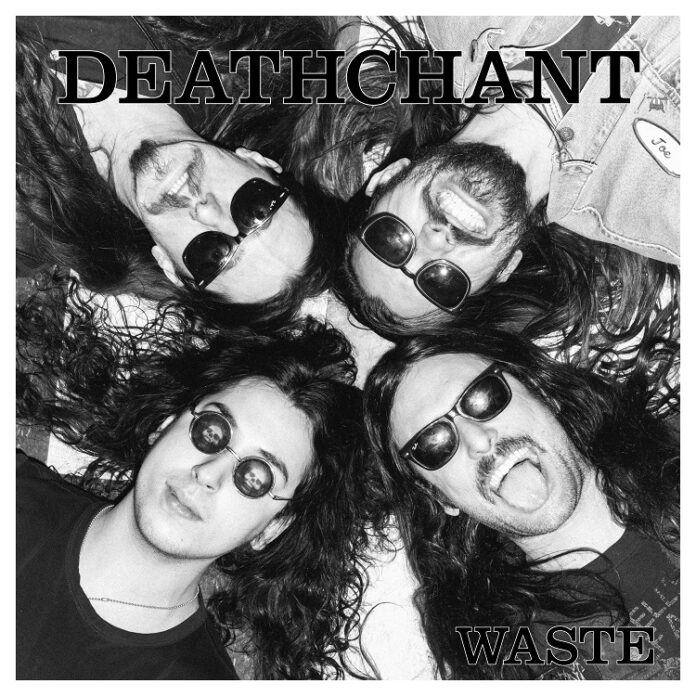 Deathchant are a quirky bunch. The very reason, actually, that Maximum Volume Music is called that is because I can’t be arsed with limiting myself to one thing or the other. If I want to review a rock album, a punk album, a country record, a blues one, I will and there ain’t no one gonna stop me.

In many respects, I’d like to think that the four men who make up Deathchant would concur with all that.

“Waste” frankly, is a curious album. Not least because by and large its improvised, in the main. “Improv is a huge thing for us and always has been,” singer/guitarist T.J. Lemieux says. “The musical freedom to look at the other dudes in the band and be able to take things wherever we want to go is magical. I like the feel of ﬂying off the hinges.”

So they hired a cabin in the mountains of California for two weekends and made their second album, so for seven songs and half an hour, they basically just do what they want.

From “Rails” though – the opener – you’d never get that, you’d think you were listening to a classic rock band, and to be honest, you’d think you were listening to Thin Lizzy to start with. No higher praise, either, given they are the greatest hard rock band in the history of music (no arguments to the contrary will be accepted) and it is no mean feat that the second song “Black Dirt” is even better. As someone who is never to far from playing a Corrosion of Conformity track, I know of what I speak.

And the fact by now that you never quite know what to expect on this, their sophomore album, is never better shown than on the ferocious “Nails” which is like the best song that High On Fire never made, and they follow it up with “Gallows”, something that is proto metal, or at the very least, the type of thing Dave Wyndorf will do if ever Monster Magnet make another covers record.

That this has no coherency at all but hangs together so well is testament to the skills here, and the title track proves that by not hiding its love for “classic metal” and basically pissing over the awful, overhyped, Ghost and everything they’ve ever done in the process – which would be a merciful fate indeed, so to speak. Indeed, “Plague” likes the idea of that so much it basically does it again, one more time with feeling.

When I read that this was improvised, I can’t lie to you, I thought it was going to be a load of self indulgent jams that were no use to anyone but the band themselves. As the last one, “Maker” – an instrumental that possesses echoes of both Maiden and Lizzy  – thunders out view, it is a wonderful underlining of the fact that its good to be wrong sometimes.

They are never destined for chart stardom, but you suspect that suits Deathchant just fine. They’d much rather hole up in their cabin making music on their terms and proving that no good idea should ever go to “Waste”. This website will adopt them as the house band anytime.