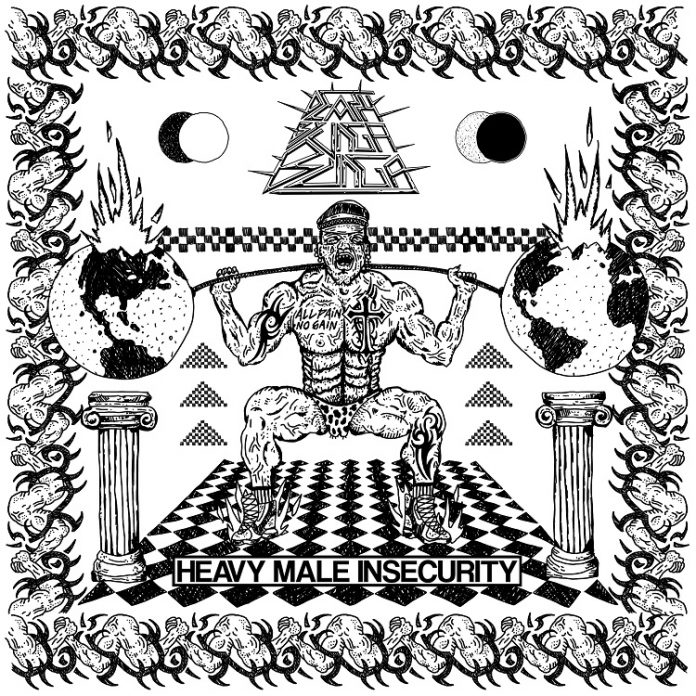 I am not sure how else to start this review. So, there’s a line on the opening song on “Heavy Male Insecurity”. It’s called “Modern Man” and it deals with the issues surrounding masculinity in 2021. “He enjoys baking, and doesn’t eat meat everyday”. It’s tempting to end the review there, because that’s rock n roll peaked this year.

However, that’d be frowned upon, and its merely one of the gems, one of the many, many surprising moments that is contained hereabouts.

I mean, first of all, whether I am the target market who knows. I don’t bake (never seen the point when you can actually buy cake) and I do eat meat every day, but lets put our differences behind us and instead celebrate the outright genius (and that is a fair word) that this contains.

Death By Unga Bunga are Norwegian. It’s always worth reminding ourselves of that seeing as they essentially sound like the Hold Steady jamming on Dinosaur Pile-Up songs with Puppy and PkewX3, in short, they are a sugar rush of Punk Rock if it was made after a binge of Skittles, and with lyrics that no one else would think of.

Like “Egocentric”, which chugs along with a chorus that manages to worm its way into your soul, “My Buddy” cheerily offers that “if you want to get to know me really well, punch me in the face” and has a guitar solo that would make Scott Gorham blush – all in the same song.

“Not Like The Others” (you don’t say?!) namechecks Jackie Chan, for grins, “All Pain No Gain” is your soundtrack to good times  – its that simple. Life cannot and will not be all bad if songs like this exist. It seems to be about body-building, to be fair I am not sure.

There’s a genuine wide eyed innocence about this. “Like Your Style”, which is basically a ballad for people that don’t like ballads (seems I am a target audience after all…..) and Fountains Of Wayne fans need to gravitate here, while “Live Until I Die” would have been an indie club floor filler, around the time of The Strokes. Except this explodes like a glitter cannon.

Thing is, whatever this does – whether it’s the slight tangent of the groove on “Trouble” or the more expansive “Faster Than Light” –  there’s one word that basically could underpin the whole thing: Urgency.

This has got more energy than a 2-year old after nap-time. That even applies to the last one, “White Lies”, which for this album, is positively prog rock as it clocks in at over five minutes. It’s the best song called “White Lies” that isn’t by Jason And The Scorchers, that’s for sure.

You can see them finishing gigs with it, having a good old freak out and maybe smashing stuff to pieces. Because “Heavy Male Insecurity” is the type of record that tackles some big stuff but ends up being so uplifting and fun that you neither know nor care at first. When you peel it away it reveals itself fully – which considering it was brilliant to start with, is no mean thing.