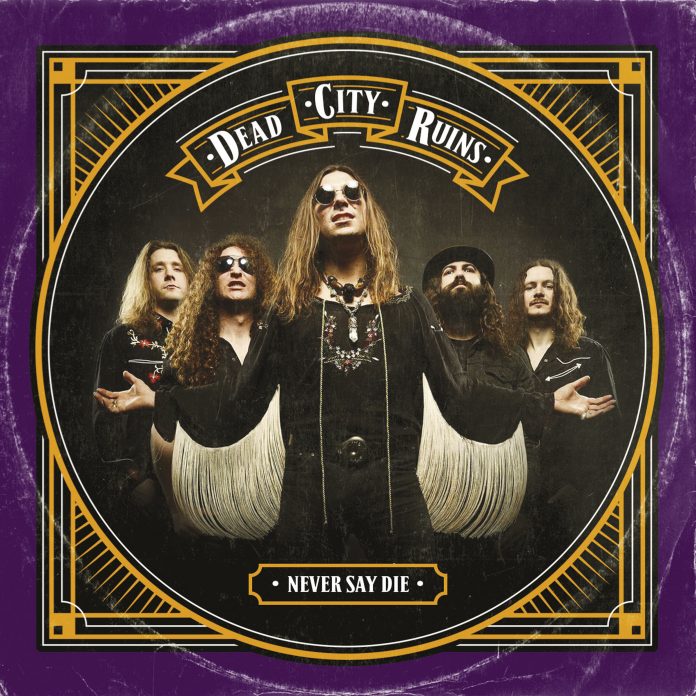 You can bet your life that every struggling football manager loves to tell you how much they “care”, how they are “hurting like the fans”. You can pick up any rock magazine and read a story about how hard the band has worked in the studio, how they’ve “slaved” and whatever other word you want to put in there.

In the case of Melbourne’s Dead City Ruins, they can take these epithets and genuinely tell you they’ve given everything for the band.

Back in 2013 this reviewer saw them support Skid row and Ugly Kid Joe and mentioned on the forerunner of MV that you “should keep an eye on this mob, they might be worth it.”

We knew then they’d paid their own way over here. What we didn’t know was what happened two years later. In 2015 they sold everything they owned, gave up their jobs back home and came to Europe to make it.

This disillusionment with the rock n roll scene of their homeland is perhaps reflected in the fact that the nine songs it includes have pretty much nothing at all to do with what we might term the classic “Aussie” rock n roll swagger. Instead, “Dead Man” takes about three seconds to mark itself out as different. A groove, a slam something akin to that of the aforementioned Skid Row in their “Slave To The Grind” era, but that’s not all. Before it’s done they’ve referenced NWOBHM (singer Jake Wiffen lets out a very Halford type scream at the end) a bit of Black Label Society and a touch of Thin Lizzy – no mean feat in less than three minutes.

This is their third full length and although the others have been excellent, this is the most confident sounding. “Bones” comes from the same filthy, greasy gene pool as Crobot might have done on their first, and “Dirty Water” drinks from the same well as the mighty Monster Truck. “Wash me clean” goes it’s hook, but it’s debatable whether there’s a strong enough detergent around for that job, in fairness.

Rock and roll the way its meant to taste, hewn from endless nights in a van (they helpfully call their tour bus The Blue Bastard) and from sleepless nights for the release of playing live. Its credit to the producer James Lewis (who has worked with acts like The Arctic Monkeys) that he has captured the essence of DCR right here.

There is no little skill, either. “Rust And Ruin” is a ballad with a dreamy side, which they follow up with “The River Song” which is firstly, surely designed for playing live, and secondly is the type of thing that if Black Stone Cherry did it, would go platinum.

Not that Dead City Ruins are ever found wanting when it comes to the soaring stakes.,  “We Are One” has echoes of Thin Lizzy covering an early Def Leppard song, and “Destroyer” is a short sharp boot to the balls but still aims high.

“Raise Your Hands” (not a Bon Jovi cover….) is almost a hymn to themselves. The first line, “Raise your hands if you wanna be saved” casts them as rock n roll preachers, and there’s even a cheeky little Led Zep reference too.

The short nature of the album that there is nothing extraneous, but the closing “Lake Of Fire” gives hints perhaps that there is more still to come. Epic sounding it winds its way around and effectively is two songs in one given the way it builds.

It – like the rest of the record – is testament to Dead City Ruins ambition. “Never Say Die” is the sound of a band pulling out all the stops. Like you have to when everything you do is make or break. This is one gamble that is paying dividends.