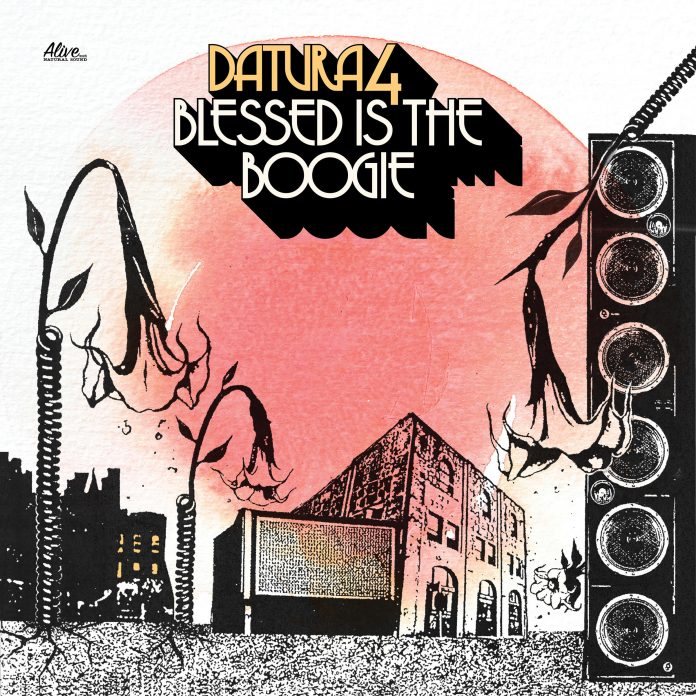 Datura4 are one of those bands. One of those bands, really that I am going to spend the next 600 words talking about and yet, you’ll know in the space of the first 45 seconds of the opening riff whether you like them or not.

Dom Marini and his boys have been at this for four years. Mariani was the frontman of garage rock gods The Stems in the 80s which garnered them some early interest. But early interest only remains interest if the songs here are worth talking about.

Which brings us back to the first riff on the record.

“Black Dog Keep Running” deals with depression but does so in a way that suggests they are going to get rid of the dark feelings by the power of rock n roll alone. Mariani locks into a groove here, and when they do, I’ll bet you any money you like your head is going to nod. It’ll be like an involuntary reflex. If you don’t like that, then Datura4 thank you for your application and they’ll see you later. There’s a lot more of that to come, believe it.

The title track has a more incessant hum. But it has got a glam rock sheen too – handclaps always do that – and it sounds righteously and unapologetically dirty. The harmonica lick (word intentional) likes the taste of whatever is on offer here.

“Looper” is proudly not of this century (in fact judging by the sound of this record I’d be surprised if anyone here had heard an album past about 1976), “Run With Lucy” slides it in  over a brilliant slide solo, and is so catchy you’d probably be best to get a jab.

“Ooh Poo Pah Do” (and no I swear I am not making this title up) is built around an organ riff that will have Jon Lord looking down with pride. It’s also about as much fun as a song with the title had better be. “Sounds Of Gold” actually ups things – which is no mean feat – by coming in with an enormous guitar part and mighty percussion and a breakdown which has echoes of The Stones. It might be the best thing here. But I’ve changed my mind about ten times. It’s the best thing here this time, let’s just say that for now.

Whilst you wouldn’t say the final third of the record changed too much in reality, it perhaps does sprawl a touch more, shimmer and shake as opposed to slamming. “Evil People Part 2” is actually a bit funky (probably for the slow dance at the end of the night?) while “Not For Me” a six minute thing that has just a touch of “More Than A Feeling” about it, and if it was the work of an American band, you’d call it Blue Collar. As Datura4 are from Freemantle in Western Australia, we’ll call it blue collar anyway because we’re lazy!

“Cat On A Roof” likes the balladic, mid-paced stuff so much it does it again, but with a rare class and “City Of Lights” is not only the last thing here, but also the longest, it winds its way, it meanders, but it is a copper bottomed, gold plated (and any other metal you want to name) slice of brilliance.

Here’s another precious metal for you. Platinum. That’s what Datura4 deserve to be too. This is a record that makes you feel everything rock n roll is supposed to make you feel. And this time, you really can blame it on the boogie.