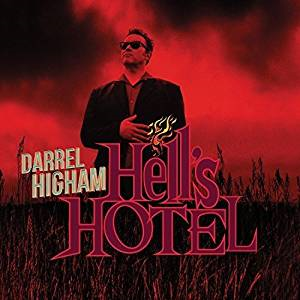 The UK’s premier rockabilly guitar hero books himself, and his Gretsch, a room in “Hell’s Hotel” with magnificent consequences.

Even if you foolishly don’t recognise the name you will know the music of Darrel Higham. For more a decade he was the musical backbone of ex-wife Imelda May’s career.  Over that time he honed his craft and developed a modern rockabilly sound that pays due homage to the greats like Eddie Cochran, a man who inspired Higham so much he co-wrote the first biography, entitled “Don’t Forget Me” on the great 1950’s rock ‘n roll pioneer.

Despite his love of the classic rockabilly sound Higham is on a mission to give the feel and musical emotion of his favourite music a very modern take. His work with May, who makes an appearance in the backing vocal department,  hinted at the fresh and vibrant sound that he wanted but now he has struck out on his own, accompanied by two very fine musicians in bassist David Konig and drummer Russ Chadd, he is free to let loose and explore every avenue  that he ends up wandering down.

Of the twelve tracks on the album eleven are originals, however, even on first listen, you will swear that you’ve heard it before, such is the classic nature of his sound, voice and rhythms.  However, just because the sound is familiar it doesn’t mean you are in for a comfortable ride.

The title-track “Hell’s Hotel” kicks off the album in a delightful b-movie macabre fashion. It’s a perfect opener and sets the tone and atmosphere perfectly for the aural pleasures that follow.

There is much wishful thinking going on with the track “Hank Williams And Me” where Higham regales a failed, albeit invented,  tale of writing a song with the country legend.  Careful what you wish for.

Tracks like “Turn Around And Go”, the truly magnificent “I Found A Smile” – which incidentally is the best track his hero Eddie Cochran never wrote – and “The Blues Is The Blues” are the foot-stompin’, whiskey drinkin’ bar-room shuffles that bring out the pure joy in this musical style.

The legendary jazz-funk percussionist Snowboy isn’t shy about lending his talents to this album and Higham shares vocal duties with none other than Robert Plant on album closer “Please Give Me Something”, a cover of the Bill Allen & The Back Beats 1958 classic. If that wasn’t enough Jools Holland joins him to lend some of his famed piano work.  This album is dripping with class, passion and creative energy that is impossible to ignore.

To be honest the vast majority of tracks would not be out of place on a triple-disc set of rockabilly’s greatest hits such is the quality and consistency of a man who sounds like this is all he wants to do in the world.

“Hell’s Hotel” is the most accomplished album of Higham’s career to date.  A considerable achievement  given his storied back catalogue.  This album is an essential addition to any self-respecting lover of rockabilly, blues, or for that matter, music in general.