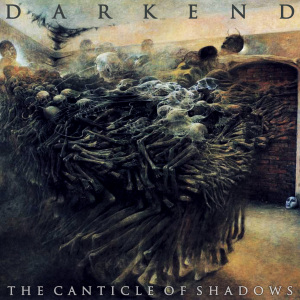 Italian Black Metal maestros Darkend like to push the boundaries of traditional extreme metal and have never been afraid to allow their varied influences to enter into their own work, often with spectacular results.

Their latest album is bolstered by the inclusion of several guest appearances, most notably Niklas Kvarforth (Shining), Attila Csihar (Mayhem), Sakis Tolis (Rotting Christ) and Labes C. Necrothytus (Abysmal Grief) with each of them brings their own unique talents to the fold.  Fortunately for the band the individuals concerned checked any well-earned egos in at the door and allowed their ability to service the tracks that they were on rather than dominating said tracks for their own purpose.  At the time of recording clearly these gentlemen knew something the rest of us are only now beginning to realise; that Darkend are becoming a very special band.

Each track has it’s own unique signatures, not easy in the Black Metal world, and the album thrives by allowing those varied influences, such as monastic chants, ethereal soundscapes and ritualistic passages, to shine when the occasion calls.  They are never over played or over used and the often delicate balance has been struck between the raw intensity of the early 1990’s and the elaborate and symphonic elements from the genre’s second and third waves.

Vocally the album sticks to the black metal territory, with the odd spoken word to add an extra menace.  The monastic chants and vocals add another step or two of depth on the spiral staircase that takes you south of Heaven.  The guitars and drums work in unison to provide the listener with a truly inspiring, if pummelling, aural experience.  Violins and saxophones also make powerful, if subtle appearances on the record to add another dimension.

Tracks like “Of The Defunct” and “Il Velo Delle Ombre” provide an air of the sinister about them in their quieter, more introspective moments, that could easily be lost in the faster and more bombastic sections of the tracks.

Nothing on this album could be considered straight forward and the dark majesty of “A Passage Through Abysmal Caverns (Inmost Chasm, II)”, which features the aforementioned violins,  is a perfect example of why this band are rising above the standard fare and catching up with the genre’s front-runners.

The Canticle of Shadows may well go down as one of the best Black Metal release of the year and despite dwelling in the darkness Darkend are headed for a very bright future, and on this trajectory their next album may well prove to be their masterpiece.  Until then this will serve just fine.  You have been warned.

The album is out via Non Serviam Records on 25th April.