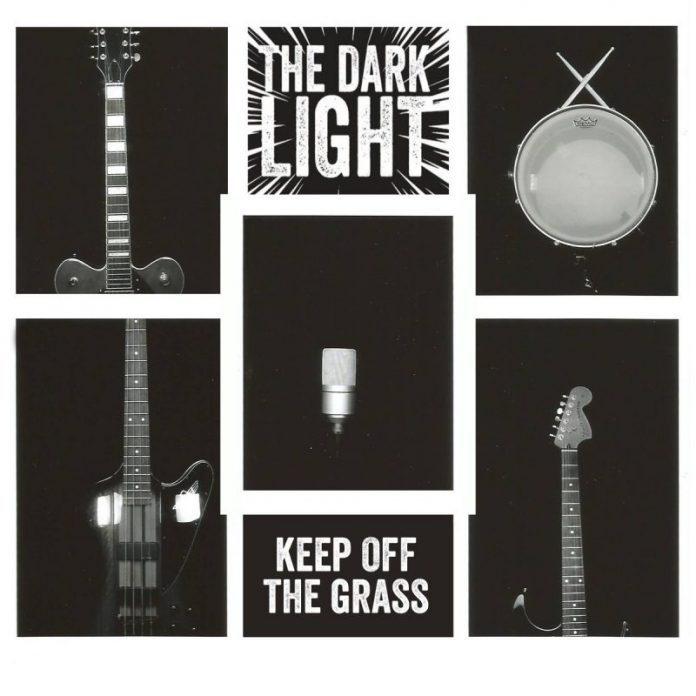 As the press pack that came with “Keep Off The Grass” – the first album from The Dark Light – rather sagely notes: “As the Dark Light’s line-up includes a German drummer, two Italian guitarists, a London bassist and a scouse singer, the band are understandably not fans of Brexit.”

The reason for mentioning that isn’t to make some cheap political point, rather it highlights the lengthy journey that TDL have undertaken to get this debut out – both literally and metaphorically.

Marco Simoncelli, the band’s guitarist, was clearly one of those people who listened to his careers teacher at school. “You never get a second chance to make a first impression” was something MV was told as a kid and Simoncelli appears to have taken it to heart too.

Forming the band years ago and even recording – and scrapping –  some sessions with Liam Watson at the legendary Toe Rag studios (home to the White Stripes and others) he, and singer Gerard Edwards weren’t happy, until now.

Which brings us back to the actual first impression of the band. Opening song “She Likes It” begins with a bass groove that tips toward the “mighty” end of the scale, before there’s a solo that screams “ambition” as very little else does.

The music that follows is similar to that of the should-have-been-huge Zico Chain from a few years ago. Modern enough not to be retro, classically infused but not some hippy-dippy Rival Sons thing, indeed such is the urgency on “To The Sky” my notes for the review simply had the words “Oasis’ first album” in the bullet-points.

That is a fair summation as well, given that nothing here is too concerned with trends, it wants to be rock n roll (star?) thanks very much. Edwards’ background as a singer-songwriter is to the fore on the wonderful slow builder “Under The Skin”, which combines a dreamy acoustic side with a massive chorus to give the effect of something like The Temperance Movement’s more recent material.

There is a sense of getting the job done about this. “It’s Alright” doesn’t bother with an intro, doesn’t need a build up to make its point, but it’s use of piano gives this a real depth, while the fuzzy solo and glam stomp of the title track has echoes of MV faves The Slydigs.

Oddly although the outright rock n roll ones are great, it is perhaps the “other” side – if you will – of The Dark Light that is the most tantalising. “Higher Than The Light” is just one of a few that would sound great in some festival field this summer, and highlight a widescreen feel that sets this apart from a normal debut. “We Are The Stars” is another example of a band with something big on it’s to do list – in more ways than one.

“Be Mine” is a 60s influenced swirl, right down to its organ, and right from the start of “Watching You Burn” you know it is desperate to cut loose, but my, how it does! It crackles with a rare electricity and becomes the outstanding moment here in the process.

The last of these very fine ten songs, “Looking For Love” is about the only time on the album that The Dark Light sound fragile. There is a sadness here, a real end of the night feel, as if it was just them in the cold bar while the staff dust the tables after last orders is called.

That is just one of the many facets to a band that is even more interesting than their twisted back story might suggest. How far The Dark Light manage to get is a question for the future, what is clear is simply that they know what they want, and you’d best get out of their way. They certainly shine here.

Previous article
BAND OF THE DAY: MINDWARS
Next article
All The UK Could (Night) Wish For