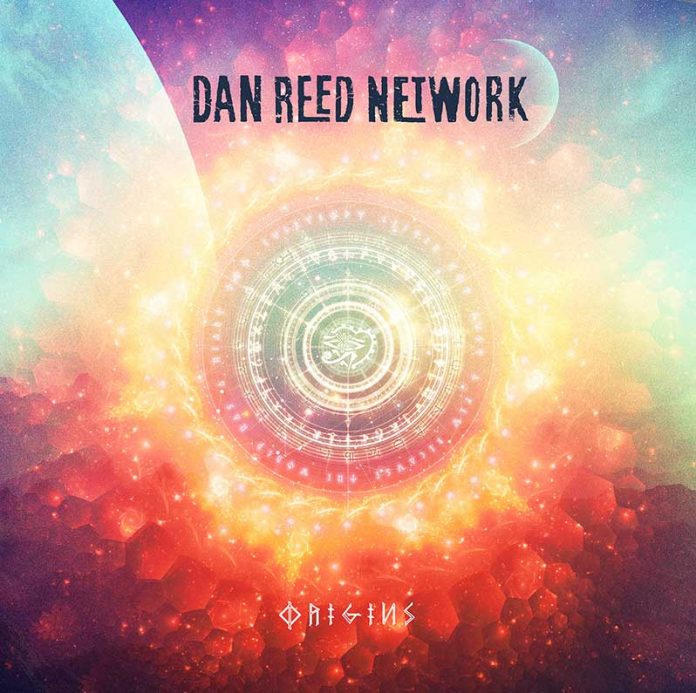 If you could imagine an American accent saying these words that would be lovely, but: “hey, Brion, lets drop the politics and rock this place up…..”

So says Dan Reed before “Forgot To Make Her Mine” one of the reworked songs on “Origins” and you what? If the vibe was meant to be fun, then Dan Reed has managed it, here.

“Origins” seems them as a very social Network, as it were. It’s eight songs are split into new and new versions of old tunes, but all – just like the old episodes of Cheers that were on was a boy – were recorded live in front of a studio audience. The result being that the fans were part of the process and the band feed off their energy.

Taking the new tunes first. Lead single “Fade To Light” (recorded in Manchester) is laid back and typical of DRN’s smoothness, but somehow it is charged with electricity because of the fans being in the room. And it is classy too, superbly played as only DRN could.

“Right In Front Of Me” is another that Reed does so naturally, while “Shameless” adds a more strident groove, a pulsing keyboard riff here and there and the massive chorus you expect, but all the while there is just something ever so slightly different, while there is some absolutely dirty guitar lead about “One Last Time” to go along with the funk.

Then there’s the four classics from the back catalogue. It’s at this point I’ll stick my hand up in the spirit of honesty and say until Christmas last year I was never a Dan Reed Network fan. I was an Extreme fan, though and I bought a ticket to watch their show in Birmingham.

My mate was desperate to see DRN – who were supporting – and insisted we turn up early. “They’re wonderful,” he said. “Dan Reed has a superb voice. I saw them years ago.”

Which is why, although each fan will have their own thoughts, to me, hearing these new takes on these old songs meant a chance to hear the band as they are now interpreting the songs then. Back to Manchester, “Ritual” has the assembled throng as part of the process – chanting the opening part for all they’re worth.

It’s interesting too, to hear the songs evolve. “Forgot To Make Her Mine” is slower, sexier somehow, and it sounds like one of those Extreme songs I loved. “Let It Go” seems particularly special to the fanbase, and not for nothing is this lilting, gorgeous version played in front of a hometown crowd in Portland, Oregon. And the one that even the most casual observer knows says hello to the “Rainbow Child” with a real chilled out new arrangement.

A thoroughly interesting collection, and one which came from a whole new place, “Origins” is rewarding for the fans and band alike. I saw some talk that this was the type of stuff that bands used to do for bonus tracks on cd singles. That neglects two things. First, no one under the age of 35 knows what that means, and second, with the best bands, the b-sides were often where they did their best work.

The sound of a band enjoying themselves, but taking everyone (almost literally) along for the ride.