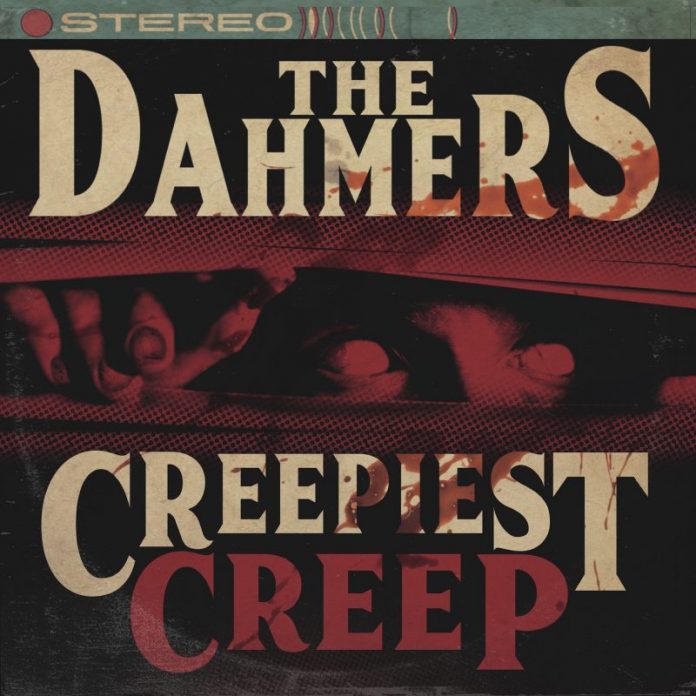 When your new EP starts with heavy breathing down the phone – and yeah, lets be honest, your band is  named after a serial killer – it’s probably fair to say that you ain’t too bothered whether your music gets played on Songs Of Praise any time soon, but nevertheless that’s exactly how “Creepiest Creep” begins.

The men behind it (at least we assume they are men – The Dahmer’s don’t do names) don’t take things too seriously, however. Rather, the Swedes – one of the more prolific bands around – are sort of what it would be like if The Hellacopters, Alice Cooper and Mike Monroe got together to jam on some Misfits songs with Motorhead and The Beach Boys.

Analysing the four tracks here (the whole thing is less than 12 minutes long) is a lot less complex than that description makes it sound. The boogie, the harmonies, the gleeful guitar solo and the saxophone of the title track make it obvious. It’s great fun, basically, that’s all that matters.

They follow it up with 86 seconds of mayhem called “Reocurring Dreams” (sic) that is so off the wall it would probably make Ginger Wildheart salivate with excitement, and just in case you think the first one was a fluke then the rip roaring “Man Without A Face” is along to disavow you of that notion. There is a moment here when you think it could be an unheard demo of Chuck Berry#s called “Johnny B Really Bad”. Or something.

Throughout, it has seemed like the “Creepiest Creep” is the soundtrack to some 1960s Saturday morning Scandinavian TV show we’ve never heard of, but would have given us nightmares as kids, and that is right to the fore on the screeching “Kiss Of Dario” which races rather maniacally to the end as if it truly wants to live fast as long as you die young. It’s like the summer of love got really ugly on amphetamines.

The Dahmers then: coming to the shadows near you. But they won’t be hard to spot. They’re the cartoon villains making all the noise. And, that’s all folks.