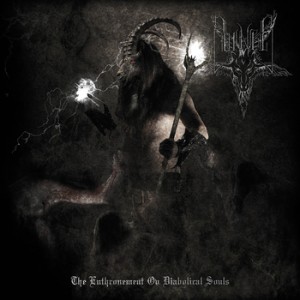 Since their formation in 2012, during the long, cold Solvenian winter, Cvinger, have been busy mystifying and terrifying Eastern Europe with a highly rated demo and EP. Now the time has come for the band to fully display their dark talents on their debut full length release The Enthronement ov Diabolical Soul.

Keeping the traditional elements of Black Metal secure they also set about defining their own extreme sound.

The pace is unrelenting and there is no light to be found in Cvinger’s debut release. This is as dark, forboding and destructive as it gets.

There is a standard Black Metal formula riff-wise to be followed here and it’s done with purpose and total commitment but there are plenty of occasions where the shackles are discarded for a more death metal-like approach which lifts the tracks concerned into another realm of desolation. “Reclaim The Crown” could be said to fit into this description. Vocally, the death metal growls intertwines like razorwire with the Black Metal screechings and it works perfectly.

The odd monastical passage is used to assist the change of change of Chapters as we await the general sense of a spiralling destruction. The use of three Chapters is a great storytelling tool which the band exploit to the full.

If you want a track that demonstrates the difference between Cvinger and 90% of other Black Metal bands than take “Summoning” as your lead.   This brilliantly disturbing track showcases what makes the band stand out from the also-rans of the genre. It’s a complex, punishing, blast-beating rhythmic diatribe that makes you wonder what most of the other bands are faffing about at. It’s almost a different genre of Black Metal. It’s certainly on a different level.

The future of the blackened  is already secure with a constant stream of newer, exciting and adventurous bands like Evil Spell, Altar of Plagues, Darkspace to name but three. However, there is always room for another great band and this four-piece are most certainly that. This album deserves mention alongside Behemoth as one of the years best extreme metal releases.

Sometimes Black Metal deserves a bigger audience just so fans of heavy music who may have preconceptions about what the genre is get their eyes opened to the power, intensity and creativity that bands like Cvinger can produce.