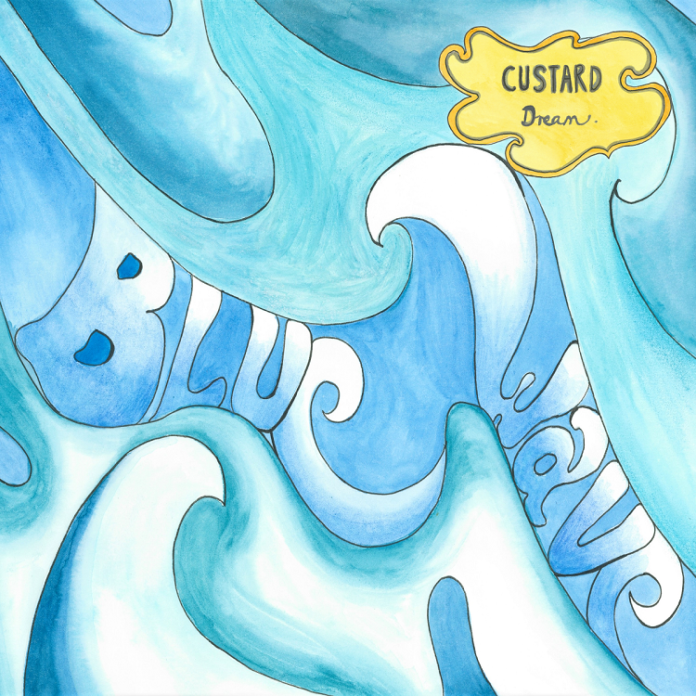 Custard Dream is principally artist, producer, and multi-instrumentalist Ryan Davies. He has a new EP `Blue Wave` released this month which he wrote, performed, recorded, and produced. As he says, “Basically I have no friends!” This is a collection of songs with an edge honed by life: this is the attitude and leanings of blues reframed from the perspective of life as a 30-something year old coming of age and feeling a tension between an affection and resentment of growing up in England.

This extended play opens with ‘Asteroid’ which according to the artist uses the scenario of connecting with something that allows a kind of revisiting and literally replaying childhood, as one might in a therapy session: “Vibrations and my hands are shaking, I couldn’t cross the final boss and now I’m breaking”. The track has a quite mesmerising dreamy texture with a constant bass line synth undertone with further synth tinges floating atop and around with vocals sprinkled in. There`s a much faster pace to `Back In The Room` which has a guitar riff layered throughout he number. At times it reminded me of the early eclectic offerings of new wave, synth pioneer Thomas Dolby.

`Devil For Hire` opens with a quite rock guitar like riff before morphing into a quite layered electronic composition with the vocals sounding like they are shared through a vocoder or some other such voice codec or other distorter. The track becomes delightfully hypnotic as it evolves and enjoys the occasional guitar chord riff as it progresses. There was a quite enthralling constant beat to `Mastermind Champion` which would have become quite trance like but for sections and segments of forceful rock outs that broke the spell, wonderful stuff.

`Ocarina Vice` is a really captivating listen. I have to admit I had to google what an ocarina was to find that the ocarina is a wind musical instrument, a type of vessel flute. I`m not sure what this has to do with the number but it`s a delight and ebbs and flows and has some superb guitar riffs throughout its journey. There`s a bonus track in the form of a reworking of the Led Zeppelin  classic ‘When The Levee Breaks’ and I have to say it`s a cracker to end on.

I read somewhere that Custard Dream brew up a mix of blues, new wave and psychedelic but with a contemporary inflection, very much not an exercise in nostalgia and that seems a pretty accurate appraisal. I really enjoyed the varied and wide-ranging genres that were offered on this EP and I look forward to what else is to come from this talented musician.