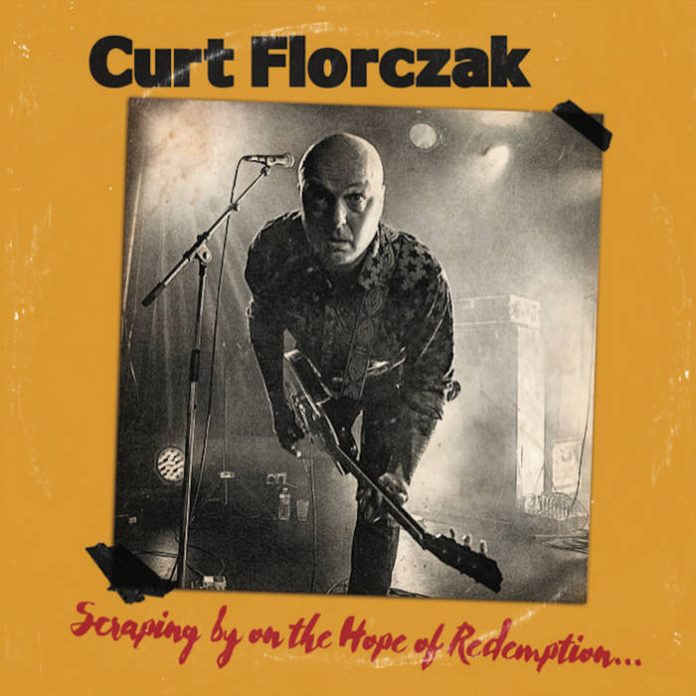 Curt Florczak is already onto a winner in these pages. He’s the guitar player (or one of them to be accurate) in MV faves, rock n roll reprobates, The Hi-End.  So you kind of have the odd thought or two of what to expect from “Scraping By On The Hope Of Redemption”. Forget them.

Because this works on the premise that I’ve always liked. That of “If I am going to write a solo record then I might as well make it different from the day job.”

Not for Curt the Rob Zombie thing of leaving White Zombie and making a string of records that – although cool – sound pretty much the same as the band he was in. No, rather Florczak has gathered together a load of his mates for a 22 minute romp that is a damn site more raw and personal than you might have imagined.

“Dead Letter Box” sets the tone, to a degree, and CF makes his spit a very Replacements  riff over one of those “words you can never say” type thing: My advice, don’t email them either (you can have that for free!).

The reason I said the tone was set “to a degree” is in the Killing Joke type “Blood Gumbo”. Heavy and political, it is best highlighted by the words “tell me why we insist on using labels? And tell me why those differences cause murder?” Good time stuff this is not. Superb it definitely is.

Perhaps the best, though is the brilliant, driving garage rock of “Take Me To Lost Cities”. The one where the EP title comes from, it is also the one that roars with an intent and crackles with an energy.

The strutting, 80s sounding “Worry Stone” has more than a hint of Elvis Costello (to these ears anyway), and Florczak, who plays all guitars and bass sounds like he’s particularly enjoying himself here.

The last one, “Watch The World’s Collide”, is the longest by some distance, and it’s a ballad, but on its own terms. More ragged, scrappy New York Dolls than polished “Every Rose Has It’s Thorn” that’s for sure, and there’s a taste of Johnny Thunders all over this.

A labour of love for a man who loves music: “I have been in love with guitars since I was twelve years old” said Curt in an interview I saw. He’s a master of it, too (and he repairs them when he’s not playing them) but more than that, he’s a fine solo singer/songwriter. “Scraping By On The Hope Of Redemption” proves that beyond any doubt.