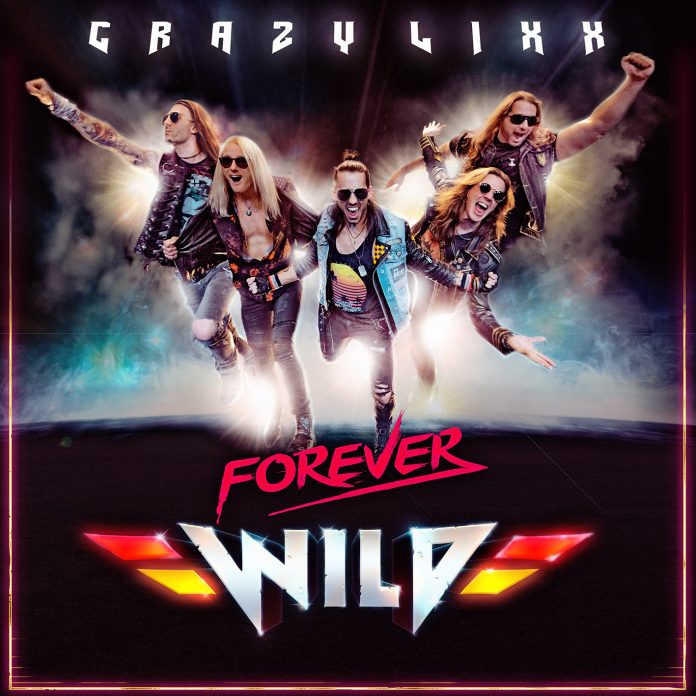 I never bought “Nevermind” when it came out.

I know, as a kid who was 16 when it was released, the social history is that Kurt wanted to entertain us, and we were seething with existential rage and wanted to get on board and in so doing laid waste to all the hair metal.

That’s a load of nonsense to be honest. There were some of us that were still happily listening to Warrant. And even though I did eventually get into Nirvana a year or so later (“Heart Shaped Box” came out and I decided it was about me and a girl called Helen…..) I never, really truly, left those “Cherry Pie” days behind.

Somewhere, in Sweden, Danny Rexon was – probably – mixing up the batter while she licked the beater too, as it were.

Because the Crazy Lixx main man, in honesty, probably hasn’t left the 1980s yet, never mind got into grunge.

The way they usher in “Forever Wild” – their sixth album – is with a riff that Bon Jovi left behind off “Slippery When Wet”, a guitar solo then something like this, give or take: “plain Jane, they say, no need to bother, but you’re sex, on legs, hiding undercover”.

Christ, fetch my spandex boys, sleaze is back.

And yes, ok, I’ll be honest you listen to it and you think, “blimey, they don’t make them like this anymore” but that sort of misses the point.

Rexon and the rest of Crazy Lixx know they don’t make them like this anymore. So they do.

“Break Out” – and you probably don’t want to analyse this too deeply – suggests that “you should live the life you were born to live” and that’s basically what this is. This is a band who are making the music they absolutely want to, and they love it.

So the solos soar and the whole thing sounds huge. On my notes for “Silent Thunder” I wrote these bullet points: “Power metal if it was played by FM” and “what did grunge do?” (and there you were thinking I’d just chucked that intro in, huh?) and both those things are fair enough.

Viewed through a prism of 21st century morality, then the filthy groove and filthier lyrics of “(She’s Wearing) Yesterday’s Face”, jar a bit, but actually, it could be argued that it rather celebrates – and encourages – the unnamed woman on “the walk of shame”, so you decide.

“Eagle” is much easier to dissect. It couldn’t sound more like it’s a Def Leppard song if it tried in honesty, and it does the “eagle soaring into freedom” thing. Speaking of soaring, you’d best believe “Terminal Velocity” has plans, schemes and ambitions to take on the world and leave no arena safe.

A lot of “….Wild” kind of sounds like its on one of those compilation records your Nan used to buy you at Christmas because everyone thinks you like every rock song, but that thought is all over “It’s You” and anyone who remembers Nelson might just want to cast an ear. Lyrically, if you want to hear what love sounds like to hard rockers (“heavens got an angel missing, she’s right before me blowing kisses……) then crack on. No one actually, in the history of the world has ever felt like that, but whatever.

If that one is utter crap – it is, face facts – then “Love Don’t Live Here Anymore” isn’t far behind. If you think its going to sound like big, old shmaltzy bag of sugar then you’d not be wrong.

Happily “Weekend Lover” finds its balls and is a million times better as a result and the near title track “Never Die (Forever Wild)” might open with what you think is going to be some take off of Skid Row’s “18 And Life” but it actually sounds the most metal thing here.  Like the heavier end of what their countrymen H.E.A.T might do.

And in these 10 songs – whether you like them all or not – they’ve got a class and Crazy Lixx have pulled off every single aim they had.