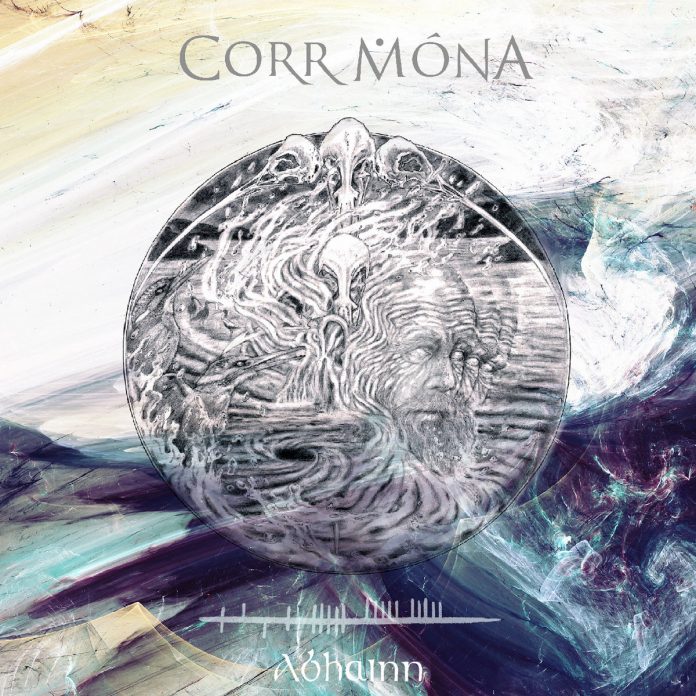 Corr Mhóna are a four piece Metal band from West Cork who were the first Irish Metal band to sing entirely in Gaelic / Gaeilge, their native tongue. The band was formed in 2008 by two sets of brothers, Paul Quinn (guitar/vocals) and Stephen Quinn (bass/vocals) plus Martin Farrow (guitar/vocals) and Robert Farrow (drums) with the view to write, record and play Metal without subscribing to any subgenre. They have a new album `Abhainn` their second, a concept album following the journey of a river from source to wide ocean, with all the energy and tranquillity that entails. Corr Mhóna translates to heron but as with many other animal and bird names in Irish, it also has a more literal meaning which is “the twisted thing from the bog”. Abhainn (river) is a concept album about water and specifically the rivers of Ireland. Rivers hold an important place in the universal psyche. On one hand, rivers are the veins of the Earth, bringing life; on the other, they are a force of nature that can bring destruction. This theme of duality is always present in Corr Mhóna’s work.

The album opens with `An Fheoir` or The River Nore. It encompasses parts of three counties (Tipperary, Laois, Kilkenny) and the name is believed to derive from green bank or shoreland. The track is stripped back with vocals and acoustic guitar giving it a quite choral, ethereal feel. We drift into `An tSiúir` or The River Suir which itself flows into the Atlantic Ocean through Waterford. The number builds with layered guitars, bass and drums and emits a sense of strength but with a slight edge.

`An Bhearú` or The River Barrow is a more belligerent quite musically aggressive offering which has some growling vocals shared atop an almost speed metal pace. It veers towards a more power metal texture as it progresses. There`s an almost boiling cauldron at the heart of `An Laoi` or The River Lee which may be as this river flows through and on which The City of Cork was built. Maybe it reflects the turmoil as the river splits creating an island on which the city resides.

`Banda` or The River Bann translates to The Goddess. It`s a quite diverse piece musically and begins with screamed and growled vocals and a wall of controlled noise before drifting into a slight mellow section then a driving rock section with some intricate guitar riffs. It then ebbs and flows from an all out assault to a kind of calm before the storm. There`s a break midway before it begins a cycle again with at times almost tribal drumming and Gregorian chanted vocals before eventually fading out. The river itself has an unsettled history and seems to divide communities along the lines of religion, politically and also economically which has meant it being labelled the “Bann divide”. We have a soothing respite in `Cumar an Dá Uisce` or The River Avonbeg which translates to small river. It has flowing water, percussion and spellbinding guitar chords and riffs in this all too brief quite meditative reflection.

`An tSláine` or The River Slaney which is the river of health returns to more of a dark metal texture with powering drums, blinding guitar riffs and growling vocals shared at times but also tempered with some more otherworldly vocals or utterings which gives it a strange light / dark clash of sorts. There`s a sort of transcendent feel to `Uaimh` which seems to translate to crypt or cave, dripping water, whispered voices and acoustic guitar tinges guide us through this subterranean fragment.

As one would expect `An tSionann` or The River Shannon, the longest river in Ireland is a superbly larger than life offering. At times it felt like a call to arms with drumming that seemed almost tribal and gave this composition a quite nomadic sense, quite possibly reflecting the history of this dominant and mighty waterway. Indeed, The Shannon covers one fifth of the area of Ireland. According to Irish mythology the river was named after a woman named Sionann, the granddaughter of Lir and this seemed to almost be addressed in the latter part of this track where it took on a more symbolic feeling of tradition. Ultimately, the album closes with `An tSuláin` or The River Sullane which seems to build with guitar chords quietly shared before emerging into a more robustly anthemic soundscape. We then move to lapping water and a passage that had an introspective moving Celtic vibe from which we are awoken by a scream and forceful guitar riffs. The sound of waves hitting the shore and squawking gulls brings us to the conclusion of this journey. As The River Sullane has been infamous for drowning unfortunate souls this track seems to almost reflect that notoriety.

What I most enjoyed about `Abhainn` apart from its musical dexterity was its reference to their native lands rivers. I`ve travelled most of Ireland and apart from the Shannon, Liffey, Lee, Blackwater, and Lagan, i’ve never given much thought to this ancient land`s waterways. Corr Mhóna are to be applauded for treading a different path by singing in their native language and promoting its history and folklore.

I found this offering quite mystical, spiritual, and thought provoking at times and i`m sure you will if you`ll allow Corr Mhóna to lead you along this journey.

Previous article
BAND OF THE DAY: CALLOW YOUTH
Next article
MY NAME IS, MY NAME IS