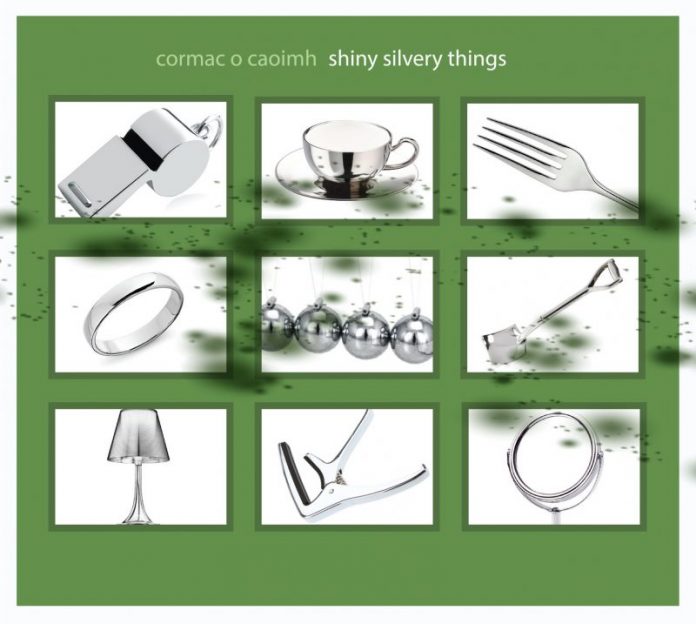 Hailing from Cork, Ireland, Cormac O Caoimh is a singer- songwriter, a classical guitarist and the former singer of the band The Citadels.

He has released three albums since the band’s demise, 2007’s Start a Spark, 2012’s A New Season for Love and 2014’s The Moon Loses Its Memory. Shiny Silvery Things is his new offering and showcases Cormac’s unique song writing and guitar playing. The album was recorded and produced in Maple Room Studios by Cormac O Connor and partly in Cormac O Caoimh’s attic.

`Second hand Clothes` introduces us to this release and it’s a really interesting slice of intelligent nostalgic pop that would not stand out of place on any of Prefab Sprout releases.

A beating drum and twinkling piano keys opens up `Silence And Sound`, a song that really gets under your skin. Cormac`s vocals are almost softly spoken and are complimented with some interspersed violin strings.

`Proud` is a real upbeat tune, very danceable, with lyrics about trying to persuade somebody to be pleased or satisfied with the narrator. I could see this one being a real crowd pleaser in a live setting.

A more sedate reflection on a relationship that has drifted follows with `Hey You`, which benefits from the stripped down backing of just a piano, bass and guitar.

`Born` is a very haunting tune which is mostly Cormac`s voice spread over piano keys and violin before it is supported by a full band compliment to reach a crescendo.

The next tune `Have You Built Yourself Well` reminded me of the best sophisticated pop numbers that the wonderful Deacon Blue used to write with Aoife Regan’s vocals the perfect foil to Cormac’s.

`In The Hollow Of An Old Oak is a strange offering. It has an eerie presence and at times feels like a kind of mantra or chant.

A sort of love song with the oddly titled `Tea In My Teacup` follows, which is a metaphor for supporting somebody during tough times.

`Big Mirror` is another slice of pure pop and once again the use of Aoife Regan’s backing vocals to support O Caoimh  is a master stroke.

I really loved `A Parked Car` it was a wonderfully layered outing. It starts quietly with a beating drum, piano loops and Cormac`s descriptive words before John O’Connor’s saxophone saunters in. Midway through the band merge before the drums and sax lead us off and out of this piece.

The penultimate number is the title track `Shiny Silver Things` a straight up jazz ditty. Quite unexpected.

Closing out the album is `Lampshade Lights` a captivating serving of clever pop and a fine way to end this release.

This was an interesting eclectic composition. A collection of fine songs. An assortment of stories and scenarios, thoughtful and idiosyncratic lyrics shared against a background of catchy pop music delivered by some very gifted musicians. The performers included Eoghan Regan on electric guitar, Martin Leahy and Dave Donovon on drumming duties, Colum Pettit is playing violin, Cormac O’Connor on bass and keys and Aoife Regan on vocal duties. Mr O Caoimh has a fine voice which had a wonderful South West of Ireland accented twang at times. He knows how to write a good song and also how it should be delivered.

This was a real magpie gathering of songs and stories and they say that magpies are engrossed and attracted to Shiny Silvery Things and with this, they certainly aren’t wrong

Previous article
Seven, Son
Next article
Slaughter In The House