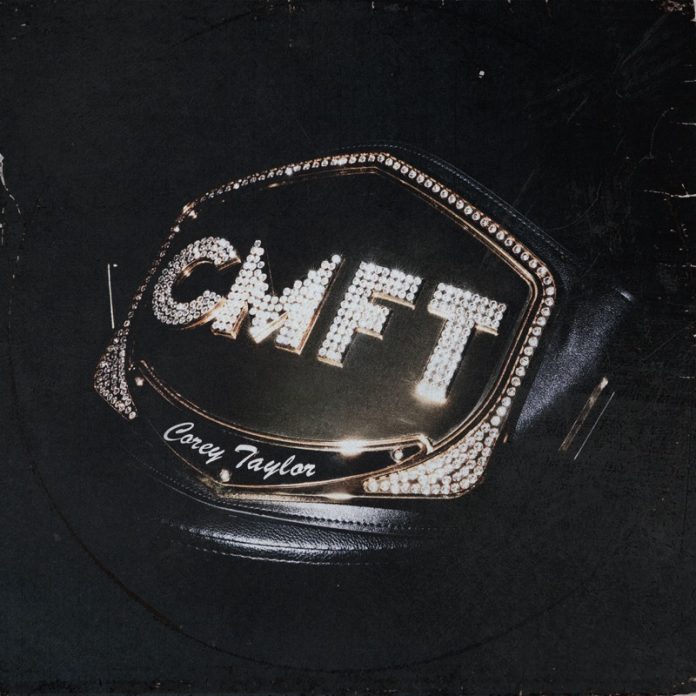 “CMFT”. Four letters that mean everything. At least they do here. It stands for Corey motherfucking Taylor, and that, essentially is this collection.

There’s always been something wonderful about Corey. The feeling that Slipknot, Stone Sour and any other endeavour he did was never going to be enough. There are certain artists that you just know you’d like their record collection, that you know subscribe to your own view: the one that says there’s only two sorts of music in this world. Good and bad, and that’s it. Not for Corey, you imagine is the idea of “guilty pleasures”. That bullshit concept that says you should be embarrassed to like anything. I owned a Michael Bolton record as a kid with no fucks given. I owned Slayer records too. Who cares?

That’s the vibe I get from “CMFT”. You name it, its here. And if you are looking for a common thread then here it is: It all rules.

“HWY 666” rather magnificently starts with a crescendo. It starts like the beginning of a concert. “We’ve had enough of being down” it seems to say. This, right here, is your wake up call. OK, I heard Taylor interviewed by Eddie Trunk way in the middle of lockdown and this album was in the can then, but still, it sounds like a hell of a pick me up.

Then, of course, there’s Taylor’s lyrics. Sloganeering like Ricky Warwick has done since his Almighty days, and it is right here: “All I know,” he spits, “is only death provides” on “….666” and everywhere you look, there’s something that would make for a brilliant t-shirt back-print.

Even on the effortless mid-paced Stone sour type groove of “Black Eyes Blue”, he can’t resist a “you know me better than the ones who know me best” it’s what he does. He writes brilliant songs.

Pretty much every song here is an event, nearly every one is brilliant. Few are better than the utterly glorious punky hard rock of “Samantha’s Gone”, catchy, crunchy and guitarist Christian Martucci (also with Taylor in Sour and now in Black Star Riders) excels.

I genuinely had to look if “Meine Lux” was made with Volbeat. It isn’t (so far as I can tell) but if you love them, get on this. “Halfway Down” channels some AC/DC type thing, at least for a bit. But the harmonies, man, the harmonies. Jay Ruston is one of the finest hard rock producers around (Stone Sour, The Damned Things, Black Star Riders to name but a few) and he has made this sound utterly superb throughout.

There is just so much breadth to the material here. “Silverfish” is what we might call the “Bother” moment, if you will, and “Kansas” would have many singer/songwriter types robbing their granny to do something that good. More Gaslight Anthem than metal, it is a prime example of the freedom here.

“Culture Head” gives the rhythm section of Jason Christopher and Dustin Robert chance to shine in one of the heavier moments. This is thunderous. It isn’t though, the best thing here. Rather that is “Everybody Dies On My Birthday”. Angry, heavy, but with an arena shaking chorus. This is what this record was surely made for.

He’s not finished there either. Cramming in as many twists and turns as you can imagine. Want to hear CT do jazz? Sorted “The Maria Fire” has got you covered, while “Home” is one of those piano led ballads he does so well.

The last one – well the last “proper” song anyway – is the most controversial. “CMFT Must Be Stopped” split opinion when it was released. Largely because – shock, horror – it’s a hip hop song. Featuring Kid Bookie and Tech N9ne. We should be past such debates by now. It’s over 30 years since Aerosmith worked with Run DMC after all and The Prodigy was a quarter of a century ago, whatever. It’s fun and moreover, its in keeping with the “anything goes” thing that burns through this.

There’s even a punk song to finish. “European tour Bus Bathroom Song” no less, is two minutes of Black Flag type fury, here because it sounds like it was a laugh.

That’s surely the reason for this record. A desire, a need to make music away from the constraints – literally – of Slipknot or the expectation of Stone Sour. “CMFT” is one of the finest hard rock records of the year on one hand, but it is actually so much more besides.

Previous article
ARTIST OF THE DAY: JOHN FRYER
Next article
SHANG OUT