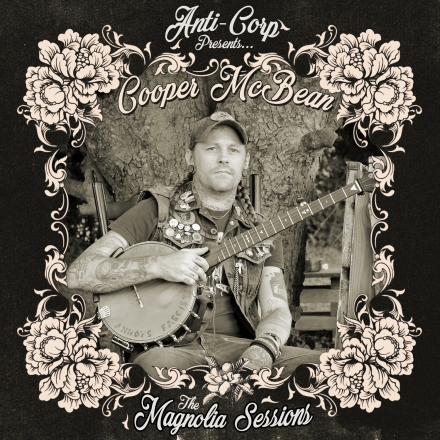 The Magnolia Sessions is an acclaimed singer/songwriter series which launched in early September 2020. The series showcases bluegrass, dark country, and folk singer/songwriter acts in an intimate outdoor setting at the Anti-Corporate Music/Black Matter Mastering headquarters in Nashville, Tennessee. Each instalment features a different artist, some with additional guest musicians, who perform a live album of sorts. We are now into the second season of Sessions and this month It`s the turn of Cooper McBean.

Born in Vermont, he has travelled quite a bit, currently residing in Austin, Texas with his human companion, two small dogs, and seven chickens.  He plays banjo and guitar and sings songs, both under his own name and in The Devil Makes Three. In his spare time, he bakes, juggles, knits, messes with modular synthesizers, is a pretty okay dungeon master, but a not very good plumber.

This release opens with `Hello` a tale of a life on the road for the lonely musician and how it effects your relationship. A gentle but wonderfully sung observation shared against some complex acoustic guitar chords where you can also hear the distant traffic noise and the cicadas vibrating their tymbals to attract a mate. A delight. We have a banjo instrumental with `Porkchops and Latkes / Sandy River Belle`. Again, the intricate finger picking is a joy. I was unaware of what a latke was and found it`s a type of potato pancake or fritter. The second part of the number must be something to do with a beautiful woman connected with the tributary of the Columbia River in North Western Oregon.

`Wheels` is another road song from the perspective of a trucker heading back to a loved one and the anticipation, excitement, and desire with this longed for reunion. A dreamy quite introspective reflection set against a strummed acoustic guitar. We have a contemplative musing on struggling financially while others seem to be less effected by the economic downturn on `Hard Turns`. The line of “They charge you dollars while they pay you in dimes” really sums the situation up. Quite heart breaking.

`Talkin To The Wall` is a much more melancholic offering and you can almost feel the despair in the vocal delivery. A story of somebody being offered advice, understanding it but being unable to act upon it as they seem to be in such a despondent situation. We have a much more uplifting banjo instrumental with `Sally Anne /Big Scotia / Waterbound` and for some reason it reminded me of the wonderful tracks Ry Cooder produced for the film The Long Ryders. A potential number for a film score?

`Only For Tonight` is quite pragmatic and relates to somebody who doesn`t seem to be able to settle in one place and how they take comfort in either a like minded soul or even the demon drink for the night, wherever they may end up. A delightfully amusing listen.

`Tralee Gaol / Cold Frosty Morning / Fall Of Richmond` is another superb banjo masterclass but this time I felt at least initially there was a slight Celtic feel. This release closes out with `4th July` which even I know is America`s Independence Day which commemorates the passage of the Declaration of Independence by the Continental Congress on 4th July 1776. This is a contemplative musing on an individual`s own situation on this particular day. There`s an enchanting almost pensive texture about it, simply shared but so absorbing.

I love these `Magnolia Sessions` not only do you feel a sense of the evening with the cicadas. traffic noise and aeroplanes crossing overhead but you get to discover another musical gem.

Cooper McBean retains the high standard set by previous incumbents and I now have at least a dozen The Devil Makes Three albums to investigate.

Welcome back The Magnolia Sessions and thanks again for the introduction to this banjo maestro who paints some wonderful visuals with some telling lyrics.