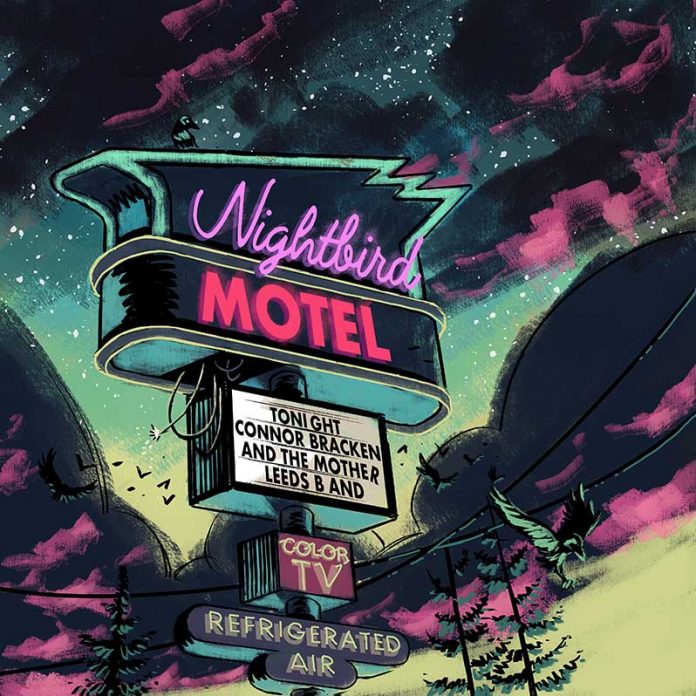 “To me”, says Connor Bracken, “”Nightbird Motel” is the soundtrack to the greatest night you’ll ever remember.” That’s interesting, because a teetotal music geek like me, can easily retort, a night out, with no gig? What’s one of them, but you get his point.

For their second record, Bracken and MLB have got a raw feel, one that seems to replicate, at least in part, the feel of those gigs that we’ve all missed and no doubt prior to March were their natural home.

Perhaps the most interesting thing about them, though, is where their actual home is. If I say to you, Asbury Park, New Jersey, then we all know what you think. You can forget it, CB and the MLB sound nothing like that at all  -in fact, there’s a very “un-American” feel to this collection. That’s not praise or a criticism, it’s just a fact.

A rawness abounds. So much so that “When The World Stops Turning” has you reaching for the nearest Jet record and going “these were better than I remembered” (possibly that’s just me….?) Whatever, it’s a cracker of an opener and by the time he’s swaggered through the solo (and he’d better), you are ready to proclaim this as special.

You’d not be wrong. “Read On You” (the one that he says in the notes gave “me an idea of where I could take the band on this”) is brilliant. Equal parts Jim Jones Revue and Dog’s D’Amour, this is the very essence of what rock n roll should be. It does though, sound like it was hewn from the British clay rather than the Jersey shore, but who cares.

There’s an interesting rhythm and structure to “Darkness” as if Bracken told the band to cut loose, and pleasingly this record has no time for your boxes and conventions, “Photograph’s Of Johnny Cash” for example pleases the Gaslight Anthem fan in me immensely, the harmonies are gorgeous and if the darker “Blame On Me” is a left turn, then it is one that shows the breadth and skill of this album in stark clarity.

Basically, though, this just celebrates rock n roll, life and good times. “Liquorstore” is full of Stones’ type feels, and “Voice On The Radio” comes from the heart as it roars in. Bracken is a talk show host and this is the result. “Nightbird”, the (almost) title track is simply glorious. If I say “Oasis” I know that’ll turn people off (although I’ve never truly understood why) but that’s the recall here as far as I am concerned, and the last couple are the proof that “Nightbird Hotel could have been anything it wanted.

“Dream Of You And Me” is a reflection, perhaps, and it sounds a touch like the brilliant Jeremy And The Harlequins, and “Reprise” seems to be taking a breath as the credits roll, allowing everyone, the chance to collect their thoughts – band included maybe. Even if you do sort of want to sing The Faces over the top.

As I said, “Nightbird Motel” is Connor Bracken And Mother Leeds Band’s second album. If like me you haven’t heard the first, skip right to this, then go back. It’s brilliant. And I wish I’d got some cool ending like “rock n roll future,” or something, but that was some other band from New Jersey. Instead settle for this, “Nightbird Motel” is five star service with all the dirt of a motel you can hire by the hour for all kinds of nefarious stuff.