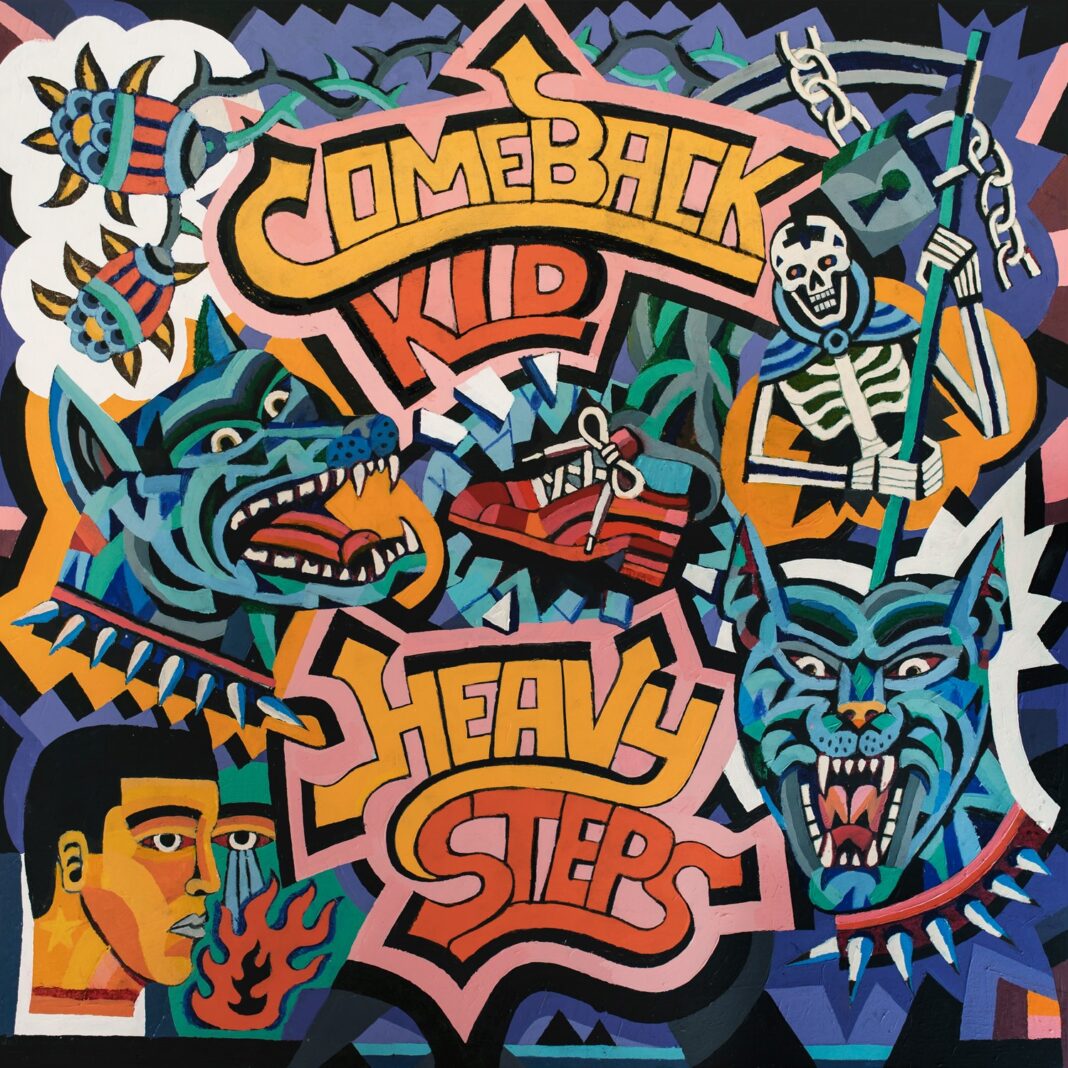 If you’re not angry right now, then may I ask why?

Hell, watching the news earlier and there’s even rioting in Canada. I can’t recall in my 46 years on this planet any time when Canada did anything other than raise a quizzical eyebrow.

This is 2022. When the discourse long since went past febrile. The leader of this countries opposition ‘was being chased about by fools today calling him a “traitor” (you can call him many things ‘Tory enabler’ being one, but not that), we’ve got a suspected paedo in the Royal Family (but its cool, he hasn’t got titles anymore, gawd bless them). Right now, the streets should be on fire at what is being done to us –  instead, we’ll send an angry tweet, that’ll show them!

Into this atmosphere comes “Heavy Steps” – the seventh album from Comeback Kid – and dear lord, it sounds like they’ve channelled every single bit of rage at the last two hideous years into the most laser guided, precision heaviness that could possibly be spread over just over half an hour.

There are times in this when you feel like you have stepped into someone else’s nightmare, odd then that the opener and title track is genuinely catchy. I mean, its hardcore, but there’s a kind of Cancer Bats singalong going on – albeit that throughout the entire record you can almost feel Andrew Neufeld’s veins popping as he screams.

“No Easy Way Out” is the sort of song that is going to get Jamey Jasta all hot and bothered that he hadn’t thought of it first, but its also the type of song that is of course going to get a moshpit going whenever and wherever it is played, the same is true of the slow building – and more thrash metal tinged – “Face The Fire” and this does have the same crossover potential as Anti-flag, or Rise Against, say to go with the fact that Machine Head would love this breakdown.

Joe Duplantiier of Gojira does his thing on “Crossed” a work of genuine heaviness and menace, and as if to emphasise that this is hardcore entirely on its own terms and it most assuredly will not fit in your box, then along comes “Everything Relates”.  Try and cage this up and it will get out to attack.

Yet, this does sloganeer like the best hardcore from Terror and Agnostic Front down, “Dead On The Fence” bludgeons as it “suggests” that you pick a side, and pick one now, but for all that, this collection possesses some colours in its paint box. “Shadow Of Doubt” lives on its grooves, and there’s some real riffing on “True To Form” that has echoes of the Cro-Mags.

Such is the pace and energy this contains that you’d best believe there’s no dips, “In-Between” with its thunderous chorus and earth shaking bass, stands out, but the stunning “Standstill”  the and “Menacing Weight” (which is the most “tuneful” by a long way) make sure that even in the deep cuts there is gold.

Bands who are 20 years into their career aren’t supposed to sound this angry, or downright menacing, but maybe, as I said at the start when even Canadians are on the streets, the finest hardcore band in that country have plenty of material. Music that pummels you to within an inch of your life is just what the doctor prescribed, and with “Heavy Steps”, Comeback Kid have produced arguably the record of their careers.