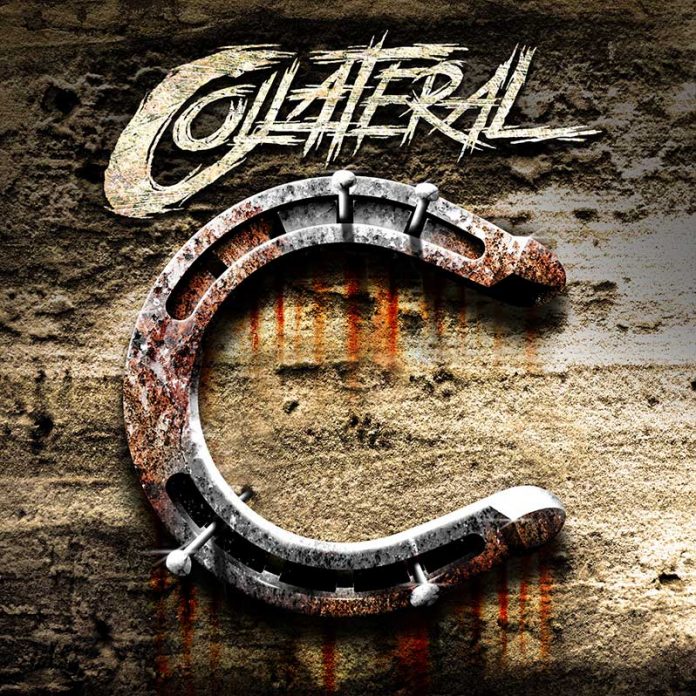 Back in the tail end of 2018, I was sent an EP by a new British band for review. Collateral’s “4 Shots” laid out very clearly what the band was. They were resolutely and completely unashamed of  having designs on being a huge, arena rock band, and they were not going to shy away from the trappings that came with it, either.

In the Autumn of last year, I saw the band. Now, if we are honest, a room above a recording studio in the backstreets of Birmingham one Friday night to a sparse crowd might be the actual embodiment of the Ian Hunter line that “it’s a mighty long way down rock n roll, from Liverpool Docks to the Hollywood Bowl”, but one thing that you couldn’t disguise that Angelo Tristan was and is a “rock star”. He just is. Some people have a presence, he’s one of them. He will be a star someday.

And that might well be with Collateral, because after “4 Shots” comes these nine bullets, if you will, and they could see them make the breakthrough.

Everything about the band, in truth screams the words “primed” and “ready”. “Mr. Big Shot” is typical of what they do. “Don’t bore us, get to the chorus” that’s the maxim here and, oh if you could make the chorus memorable and shake your fists, that’d be ace too.

As much as the rhythm section of bassist Jack Bentley-Smith and drummer Daniel Atkinson does a sterling job, Tod Winger is the right hand man here. His riffs and his guitar work in general elevates the likes of “Promiseland” to somewhere they might not go. He is the gunslinger of yore, he really is.

The lyrics are a little more nuanced than the “nothin’ but a good time” stuff you might have thought too, on “Promiseland” for example, they opine that “they’re closing the temples of sound”, but this, mostly, is a celebration.

A celebration of rock n roll and its healing powers on “Merry Go Round” and a gleeful smile at the 80s AOR stylings of “In It For Love”. The sort of thing, this, that could make FM get a little jealous, it is aware that it doesn’t sound like it came out in 2020. That’s the point.

They are also a band that didn’t want to do filler stuff, because there isn’t any. Just nine songs that have the vision, and “Get Back To You” almost single-handedly tries to revive the power ballad. Not a bad stab at it, either.

And this focus on quality means no let ups. “Won’t Stop Me Dreaming” is timeless and lets some light in on the fact that it might not always be awesome to be in a band, but “About This Boy”, the last one, might well be the key to the whole thing.

Another one from the more southern rock end of things, it is also the most autobiographical if I had to guess. This is Angelo’s life writ large. These are his dreams. And when he says at the end: “you know what this song is about, right?” it’s rhetorical, surely.

There’s one band I haven’t mentioned yet, but it’s the band that colours the whole thing. Bon Jovi. I can’t overstate how much I loved them from 1986, from the second I heard “Livin’ On A Prayer” until they got rid of Richie Sambora. I am willing to bet that Tristan – although younger than me – had the same love. I wouldn’t live the life I do without them, and I am sure I am not too far off the mark when I say that Collateral wouldn’t be the band they are without JBJ and the chaps, either.

There’s a way to go before they achieve their dreams, but they’ve got the talent, the class, and the ambition to do whatever they choose.