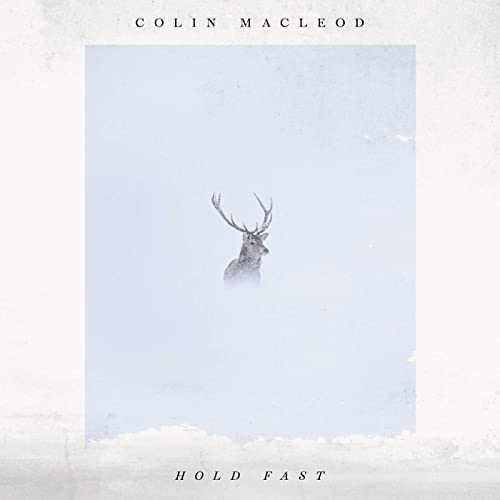 Colin MacLeod, it has to be said, is not your conventional rock star. On one hand he’s playing with Roger Waters, Sheryl Crow and Robert Plant, appearing on The Late Late Show with James Corden (apparently this is a good thing even though it’s got that fool Corden on it), but on the other, he lives a quiet life on the Isle of Lewis, where he raises a flock of sheep and grows vegetables on a croft (which sounds a damn sight more fun than talking to James Corden).

That kind of life fuels, it seems to me, “Hold Fast”. The stories are those of the wide eyed dreamers who head off into the big, wide world and by and large come back realising that the grass is not always greener.

Before we say anything else, though, it needs saying that whatever else “….Fast” is, it is brilliantly conceived and classy. It sounds like a million dollars.

The use of currency is deliberate too, given that it sounds about as Americana driven as anything on the US back dirt tracks. The lush “Queen Of The Highlands” is underpinned by some mighty lap steel and MacLeod’s delivery too, is tinged with real emotion.

A name I keep coming back to throughout this is Lucero, and like them, there’s something of the desert throughout the whole collection, but that’s especially true of “The Long Road”, about laying the ghosts of the past to rest, and the way the guitar cuts through has a real Johnny Cash thing too.

There’s a pleasing mix of styles here. “Warning Signs” would have made Brian Fallon fortunes, if he’d put on a Gaslight Anthem record, and it contrasts superbly with the much more claustrophobic “Old Soul”.

That one is one of a couple to feature Sheryl Crow – the pair toured together a few years back and have remained friends. Her verse and harmonies here are from the top draw.

Even allowing for the fact that this finds its own path, the outright heaviness of the intro to “Sleep” still surprises, while “Made Of Stone” boasts real country overtones and “33” (the other one to feature Crow) is as fragile as it is mournful and reflective.

There is an effortlessly big quality to some of these. “Runaway”, for example, is a slice of proper bombast. If its not quite Springsteen then its not far off, while “Looking For God” as a real folk strand running through it and kudos to him for the line: “Are you looking for God? I didn’t know that he was missing”. Elliot Smith would be proud of it, frankly.

The last one “This Old Place” is as cosy as an Island cottage in the winter storms. “I had my first drink here, and my last is back there too” he observes, and in many ways that seems to be the key line on the whole record. Like you can go anywhere but you can never forget your roots, and even if you could, you’d never shake them.

It’s an odd thing that one of the finest Americana albums of the year so far comes straight from the Scottish Islands, but in the case of “Hold Fast” its nonetheless true.