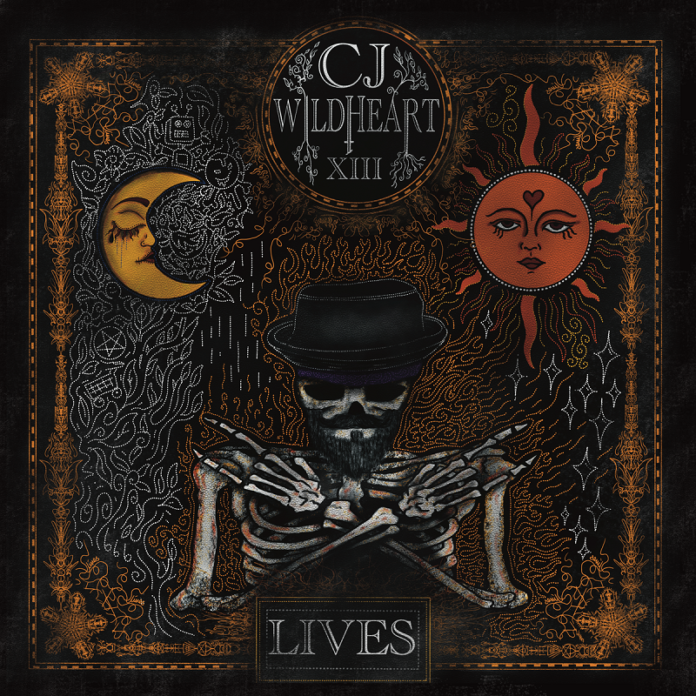 Had this website been in existence in 1996 there’s a very real chance that it would have been simply called Maximum Volume Honeycrack.

It is a fact that I believe that their “Prozaic” record is one of the greatest debut albums of all time. I also went to see the band with a mate on the tour for the album at a long defunct venue in Birmingham and it caused the breakup of him and his then girlfriend, but that’s another story for another review…..

CJ Wildheart, or Chris Jagdhar, is either a Tattooed Love Boy, or the world’s greatest sauce maker or …well one of the finest guitarists around depending on your view, but Honeycrack, man, can we talk about how good they were for a second?

But before we do, we probably need to discuss what “Lives” is. It is a 20 song best of from CJ’s career. However, as he puts it himself, he’s added a twist on things. We’ll let him explain: “One thing that has always put me off best of albums is they are normally just compilations that have had absolutely no thought put into them. I didn’t want to go down that route. So with this album I rerecorded and reimagined 13 older tracks as well as remixing 9 of my newer solo tracks.”

Credit to him, because those older songs, good grief! They sound like they’ve been hit by a barbed wire glove now. Take the two Honeycrack ones that are here, “Sitting At Home” is raw. It’s still brilliant, its still mellifluous but you’d imagine that both that one and “Go Away” (the acerbic nature of the words really comes through here) are way closer to the demos before the studio polish was added.

After the sad demise of Honeycrack came The Jellys. A drummer called Stidi who he’d worked with before and Jeff Hateley of Woldfsbane made a couple of beautiful records. So much did we love this band me and a mate were on the mailing list, which was in some place in Leamington Spa (back in the day all mailing lists went there). Living not far from there, we drove down, expecting to see some rock n roll equivalent of Willie Wonka’s factory. We didn’t know PO Boxes were remote buildings. We were about 22. Leave us alone.

There’s a couple of Jellys tunes here too. “Lemonade Girl” and “Milk N Honey” even in this re-recorded form are sugar rushes. Special mention for drummer Jason Bowld here. His day job is to bash things for Bullet For My Valentine and his power drives the new versions of the old songs.

Some of his newer solo material is given the remix treatment. “50 Percent Indian” shines like a beacon and its words are surely personal as he deals with the racism he faced growing up in Essex in the 70s, and the pop sensibilities of songs like the brilliant “Kentucky Fried” really shine through.

Now, 550 words in, I’ve got to do what I wasn’t going to: mention The Wildhearts (Christ, I’d even skirted around it with Stidi) but they are my favourite band a fact that I’ve never hidden. There’s three of their songs here. “Little Flower” from 2019’s “Renaissance Men” album, a brilliant b-side “Hit It On The Head” (which ramps up The Who bit at the start) and “Allein” probably the only Wildhearts song I haven’t heard (or hadn’t) a bonus cut from the most recent (and probably last ever) Wildhearts album, its inclusion surely exemplifies the thought that’s gone into this.

There’s one song, though, that possibly sums up “Lives” better than anything. A remixed “Itch”. It is CJ looking back on his career and concluding: “we were stupid beyond belief. All our chances we just pissed them away.” And as a fan of his music for nearly 30 years (and as I hope I’ve shown, not just The Wildhearts) I can see what he means. I mean, yes, he should be in the biggest rock n roll band in the world, but the genuine brilliance of what they created stands alone and always will. What “Lives” proves, mind you, is there’s so much depth to a career and how much incredible talent is still there.

Great music will always be an indelible memory. As will backstage in Birmingham that Sunday night. (I was on the way home, missing out like normal)…..